The host country’s Divyansh Singh Panwar, currently ranked one in the world in the event, will be up against world number two, Petar Gorsa of Croatia, and World number three Istvan Peni of Hungary, as they attempt to qualify for the eight-man final scheduled on Saturday, from a field of 55 shooters.

In Women’s 10M Air Rifle too, India heads the world charts with Elavenil Valarivan perched on the summit. That will be a tough clash as well what with reigning Olympic Champion Virginia Thrasher of the USA, also entered among the 45 Shooters in the fray.

In fact, both the 10M Air Rifle events, will give Indian audiences a sneak-peek into what lies in store for Indian Shooters at the upcoming Tokyo Olympics, with no less than 14 (seven each in both events besides the Indian quota winners) Tokyo quota holders lined up for starts at the DKSSR on Friday.

In the Men’s event, apart from Petar and Istvan, the Indian trio of Divyansh, Deepak Kumar and Arjun Babuta, will also have to contend with the likes of Hungarian Shooting legend Peter Sidi and Ukranian Serhiy Kulish, Rio Olympics silver medallist and the man who denied Abhinav Bindra a medal there.

Serhiy is still looking for a Tokyo quota and with his current rank of 41, will look to win the event to qualify. Other strong contenders for the quota in the event will be Illia Charheika (world no.10 from Belarus), Nam Taeyun (world no.18 from Korea), Peter Hellenbrand (world no. 32 from Netherlands) and Napis Tortungpanish (world no. 49 from Thailand). 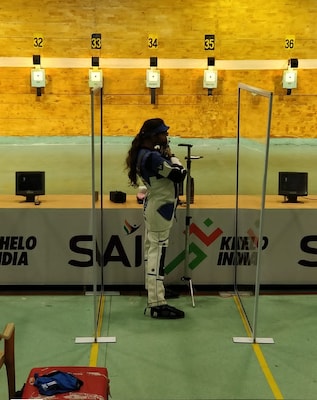 In the Women’s 10M Air Rifle, Elavenil, Apurvi Chandela and Anjum Moudgil of India will also be facing the determination of several top shooters who would be looking to bag the final rankings spot for Tokyo with an outright win.

Among them the likes of world number 11 Ibsen Rikke Maeng of Denmark, and Mary Tucker of the USA, who is currently ranked 20 in the world. This is over and above the challenge from Shooters like Olympic Champion Virginia, Croatian Rifle legend Snjezana Pejcic and world number eight and Tokyo quota holder Seonaid McIntosh, the reigning Rifle Prone World Champion.

A total of 295 shooters from 53 countries are entered to participate in the year’s first combined Shooting World Cup, which will feature all three Olympic disciplines of Rifle, Pistol and Shotgun. While most quota places have been distributed and India has already bagged a record 15 berths, a final spot in each Olympic event is still to be decided on the basis of World Rankings and this is the final event before Tokyo for Rifle and Pistol Shooters, where it can be achieved.