Washington Sundar introduces his new dog, names him after cricket stadium in Australia 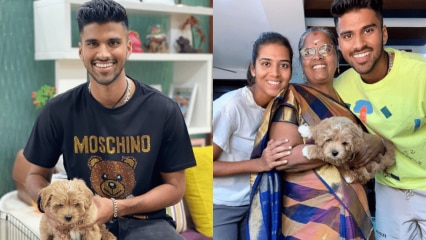 Team India and Royal Challengers Bangalore (RCB) off-spinning all-rounder Washington Sundar introduced his new dog to the world on Saturday with his name. Sundar, who spent a few days at home in Tamil Nadu shared a picture of his new dog with his sister and mother three days ago.

Sundar then asked his fans to guess the name of the dog giving a hint that said, “My Test debut!” Sundar, who stayed with the touring Indian team even after the T20Is made his Test debut at the iconic Gabba Stadium in Brisbane in the fourth Test when Indian team had no option but to play him as the injuries kept multiplying throughout the four-match Test series.

Sundar impressed everyone with his 62-run knock to bail his side out of trouble when they were reduced to 186/6 after Australia managed to post 369 runs in the first innings of the final Test. The 21-year old forged a match-winning partnership of 123 runs with Shardul Thakur, which proved to be the decisive moment in the game in the end.

Thus, Sundar paid tribute to his memorable Test debut by naming his four-legged friend after the ground he made his debut at – Gabba.

Taking to his social media, Sundar posted a picture of his new dog and captioned it saying, “Love is a four-legged word. World, meet Gabba!”

Sundar, who now will be representing the Royal Challengers Bangalore in the upcoming edition of the IPL is undergoing quarantine after he exited the Team India bio-bubble to spend some time with his family.