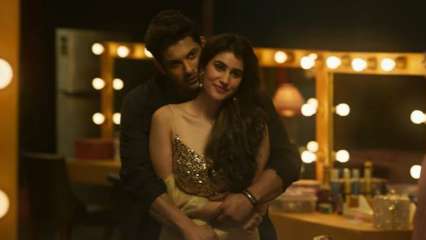 Where to watch: ALTBalaji

And thus begins the story of Agastya Rao (Siddharth Shukla) hitting ground zero and the tale of how he was ‘broken’.

‘Broken But Beautiful 3’ showcases the story of Agastya Rao and Rumi Desai from their respective perspectives. However, this review is based on four out of the nine-episode series.

Directed by Priyanka Ghose, ‘Broken But Beautiful 3’ is the story of ballsy Agastya Rao and feisty Rumi Desai (Sonia Rathee) who come from different strata of society. While Rumi comes from a rich family — a spill-over of her mother’s second marriage as she calls it —Agastya is a struggling theatre writer-director with principles (read truckloads of ego and attitude) who believes the “mediocre” world doesn’t deserve someone as talented as him.

‘Sasta Kabir Singh,’ as Rumi is heard saying in one of the sequences.

They are both very different from each other yet similar in many ways.

While Agastya demands that everything fall into place just as he wants, from the hairstyle of his lead actress in a play to the lipstick that he doesn’t wish to see on his play’s heroine, Rumi too is just as rebellious and angsty.

However, there’s more to Rumi than meets the eye in her introductory scenes.

While Agastya is an open book, a confident individual who wants to make it big but on his own terms and conditions, Rumi’s character has several layers that gradually unearth as the series progresses. She secretly desires validation for her existence and her acts as she tries hard to fit into the world that is her family. She seeks attention, is insecure, jealous and revengeful. Rumi is all that a perfectly flawed girl can be.

While validation is what Rumi craves, it’s not just from anyone but a special someone, Ishaan Rana (Ehan Bhatt), her childhood love.

A cliched love story where the girl chases the man of her dreams while he hooks up with one after another, including the “invincible” half-sister that the Rumi so hates, ‘Broken But Beautiful 3’ is predictable but not boring.

While jealousy leads Rumi to Agastya the first time she sees Ishaan with her friend Gul, who is also the not-so-talented rather embarrassing lead of one of Agastya’s plays, their one night stand ends up being a pattern Rumi follows every time jealousy gets the better of her when she sees the love of her life, the man she believes could give her all she wants, with another.

Each time she ends up wounding herself internally by sleeping with the man she claims she hates.

However, one fine soirée, held in the honour of Rumi’s London School Of Economics topper half-sister Maira, turns things around for Agastya who until now was just enjoying some action in life with a subtle hint that Rumi was no ordinary girl for him.

When he (Agastya) attends a party organised by the Desais and curated by Rumi with ulterior motives (Ishaan and his current girlfriend Gul are invited to the party as well) in celebration of Maira’s return to the country, a sudden turn of events take place in a way that by the time the party is over, Rumi ends up being Agastya’s muse for his next play while Maira and Ishaan look to be quite into each other.

Rumi is heartbroken but does not show, however, her pain isn’t hidden from Agastya who asks her to meet at the rehearsals the next day provoking her to show how talented she is to her half-sister Maira and Ishaan.

And for validation’s sake, Rumi agrees.

But remember, Rumi is still desperately and madly in love with Ishaan and totally wants him in her life.

However, when happiness eludes her, for instance when she surprises Ishaan by landing up at his doorstep to celebrate her first day at rehearsals and she ends up finding out that Maira and Ishaan are together, she finds herself in the company and bed of Agastya!

As the rehearsals for the play continue, Agastya gradually develops feelings for his muse who he knows is after another. He silently realises that he has fallen for Rumi when he gazes at her giving her debut performance in the play directed by him.

And this begins Agastya and Rumi’s perfectly flawed saga of love, obsession and heartbreak that is broken yet beautiful. A tale about how difficult it is to fall out of love than into it.

And like mentioned previously, while the plot may seem cliched, there isn’t going to be a moment in the series where you’ll want it to stop.

Verdict: It’s the fire and genuineness in Sidharth’s acting and freshness in Sonia’s performance that keeps the viewers glued and wanting to see more. Not to forget the much-talked-about, passionate kiss and steamy sequences (yes, there are multiple) between the two actors who are both making their digital debuts with the series. Additionally, the soulful tracks composed by Amaal Mallik, Akhil Sachdeva, Vishal Mishra and Sandman are not the typical run-of-the-mill romantic numbers but dripping with melody and lyrics that would touch your heart and soul.

Backed by a great supporting cast including stellar performances from Manvir Singh and Taniya Kalrra, the romance drama ‘Broken But Beautiful 3’, is the love and heartbreak saga you wouldn’t want to miss.