Telecoms Agree to Delay 5G Rollout Near ‘Some’ Airports 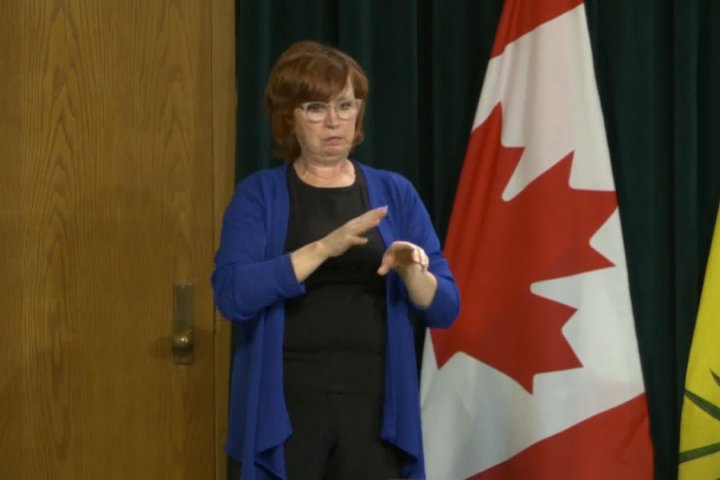 Karen Nurkowski is now a familiar face in Saskatchewan.

The American Sign Language (ASL) interpreter has covered more than 100 provincial government updates on COVID-19 in the last year.

Nurkowski said she was nervous in the early days of the pandemic, taking on a job unlike any she had done before.

“But I knew the deaf community needed that information and it was time for me to just kick into action,” she said, adding she spent a lot of time researching pandemic vocabulary.

“I wasn’t just researching sign language, I had to research English terms as well. Going back to the dictionary, making sure I had the proper meaning of the words,” she said.

Interpreting to a camera, without a visible audience, was also unchartered territory. Nurkowski said at first, the lack of live feedback made her unsure if her messages were getting across.

“It was hard to know if my consumers appreciated it and understood it and knew what was going on,” she said.

“Then I did get responses over Facebook and people emailing me, just saying how much it was appreciated.”

Nurkowski said she has also received support from outside the deaf community, along with questions about her work.

“The most common question I get asked is, why is it always me?” she said, laughing.

“We’ve done a couple of virtual interpreting with my co-workers from my Saskatoon office, but it’s always me because I’m the only one in Regina.”

Nurkowski noted that while there are a few ASL interpreters in the city, they are not all keen to work events like the highly publicized briefings.

Additionally, she said it is a challenge to get ASL interpreters to move to Regina.

“We’ve had a big surge in newcomers to Canada and they’re deaf … they’re all coming up into the workforce and they want to get jobs. They want to go to job interviews.”

While she doesn’t see herself as a leader per se, Nurkowski said she appreciates that her work is bringing recognition to the deaf community.

“When it comes to leadership, and being a role model, I will take that knowing it’s put deaf people on the map and interpreters on the map,” she said.

Nurkowski added she wants the provincial government to consider where else it can include ASL interpretation.

“Press conferences are live, so there’s no opportunity to have closed captioning on a live feed, and that’s a big issue,” she said.

“The education for things like that is important. Not just for COVID-related announcements, but for other announcements too.”

‘Made us feel equal’

Advocates for the deaf and hard of hearing community also want ASL interpretation extended to other live announcements.

Patricia Spicer is a member of the deaf community and works at Saskatchewan Deaf & Hard of Hearing Services.

She teaches ASL to families and works with children who have hearing loss, apraxia or Down syndrome. Spicer also helps adults in the deaf community find work, write resumes and gain interview skills.

Spicer was among the advocates who called on the provincial government to uphold the Accessible Canada Act, which recognizes ASL, Quebec Sign Language and Indigenous sign languages “as the primary languages for communication by deaf persons in Canada.”

“After about three days they got an interpreter into the news conferences, and after that, they didn’t miss at all,” she said.

“It’s really quite inspirational to see so many people who are interested in our language, and want to take the classes,” she said.

“Not just for the deaf kids, but for all the kids,” she said.

“So if those children grow up and become a member of the community — a nurse, a firefighter or whatever they want to be — they will have some basic sign language and if they do meet a deaf person in their line of work, they’ll be able to sign with them.”

Learn more about how Nurkowski is Shaping Saskatchewan in the above video.

Telecoms Agree to Delay 5G Rollout Near ‘Some’ Airports