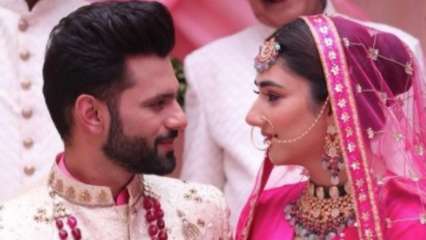 ‘Bigg Boss 14’ fame and popular singer Rahul Vaidya has been making headlines along with girlfriend-actor Disha Parmar after pictures of the couple dressed in wedding outfits went viral on the internet.

The duo, who are avid social media users, often share updates about their lives with fans via photos and videos. And it was one such occasion when Rahul and Disha took to their respective Instagram handle to share a mesmerising photo together, looking into each other’s eyes romantically, donning elaborate wedding garments.

In the picture, singer Rahul Vaidya can be dressed as a groom in cream and gold sherwani while Disha looks pretty in a pop pink bridal lehenga.

As soon as the photo hit the social media platform, fans went into a tizzy assuming that the couple had secretly tied the knot. Congratulatory messages filled the comments section of the post.

However, looks like the two haven’t really exchanged the solemn vows. Apparently, the still is from their upcoming music video for which the couple was seen dressed in wedding outfits.

And although nothing has been revealed about the new project by the couple, the hashtag #madhanya hints at the title of the music video they reportedly featuring in.

For the unversed, Rahul confessed his love and proposed to Disha on the reality show ‘Bigg Boss 14’.

TV actor Disha Parmar made her debut in the 2012 daily soap ‘Pyaar Ka Dard Hai Meetha Meetha Pyaara Pyaara’. And ever since, she has featured in several commercials and was also seen in ‘Woh Apna Sa’ show.