Mumbai find there nemesis! The name is Patel, Harshal Patel 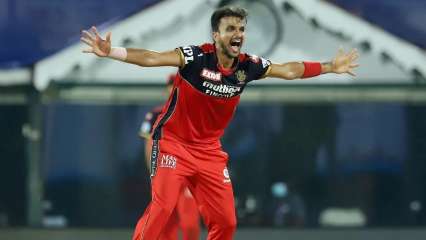 Harshal Patel traded from the Delhi Capitals ahead of the current season of the Indian Premier League (IPL) to his former side Royal Challengers Bangalore (RCB) shined in the first game on his return for RCB as he took five wickets against the Mumbai Indians to help his restrict the opposition to just 159/8 in the first game.

Harshal, who was with the Delhi side for the last three years was happy to be back with the side where his IPL journey started in 2012 in the first place. Patel had a poor start on his comeback in the RCB colours as he gave away 15 runs in his first over. However, his second spell, all three overs at the death were a major improvement and he just couldn’t stop taking wickets.

In the 16th over of the innings, he gave away just seven runs and took the big wicket of Hardik Pandya on the last ball of his 2nd over. That wicket was a major success for the RCB side as getting Hardik out, four overs before the innings end.

It inspired RCB’s comeback into the game after Chris Lynn and Suryakumar Yadav helped Mumbai stabilize with a 70-run stand. But after that, it was just a Harshal Patel show.

He took wickets of Ishan Kishan, Krunal Pandya, Kieron Pollard and Marco Jansen to finish with the figures of 5/27. This was the first five-wicket for a bowler against the Mumbai Indians in the IPL and it was also Harshal’s first fifer in the 100-plus T20s he has played in.

After the wickets of Suryakumar Yadav and Lynn, the MI innings just derailed and all the momentum just fell off the cliff as Mumbai could score only 159 runs for the loss of 8 wickets in their 20 overs.