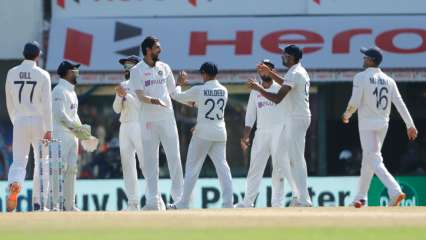 While Day 1 of the second Test saw Rohit Sharma emerge as a hero, the second day had Ravichandran Ashwin step up his game to help India have total control over the game at MA Chidambaram Stadium in Chennai.

India placed themselves in a commanding position by stretching their overall lead to 249 runs at stumps. R Ashwin‘s back-to-back five-wicket hauls at his home ground dented the English side’s hope as they bowled them out for 134.

Coming in to bat again, India started off good with the Hitman and Shubman Gill at the crease. However, Jack Leach struck and the young India lad had to go back for just 14 off 28 balls.

At the close of play, Sharma and Cheteshwar Pujara were batting on 25 and 7 respectively as India reached 54 for one in their second innings on a day.

Earlier, England were all out for 134 and trailed the hosts by 195 runs. Ben Foakes, playing his first match of the four-test series, top-scored for the tourists with an unbeaten 42, while Ollie Pope made 22.

India earlier had added only 29 runs to their overnight score of 300 for six. Moeen Ali had finished with 4/128 and Olly Stone 3/47 after Rishabh Pant’s 58 with seven fours and three sixes.

England had won the opening test by 227 runs. Ahmedabad hosts the third test, a day-night contest, from February 24.