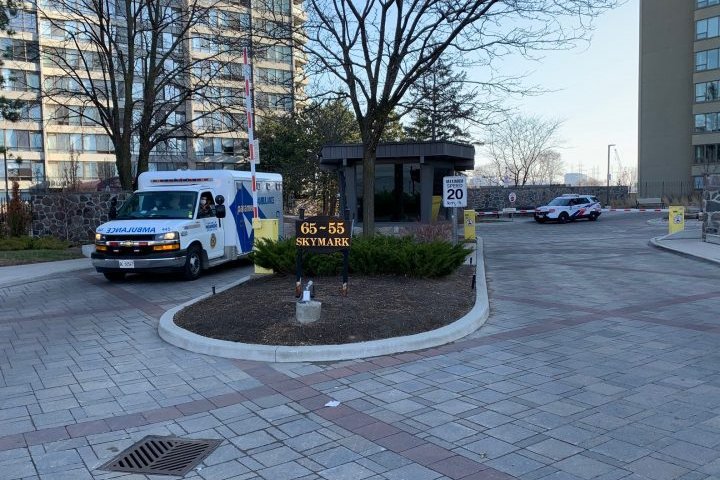 Toronto police say a man in his 70s is dead and a woman has been arrested after a stabbing at a North York apartment building on Sunday.

Police said they were called to the building, located in the area of Don Mills Road and Finch Avenue, around 7 a.m. for reports of a medical complaint.

“When officers arrived on scene, they found a male in his 70s suffering from a serious stab wound,” Duty Insp. Michael Williams said.

Read more:
Man dead, another injured after shooting in Etobicoke

“Officers and other first responders immediately commenced first aid efforts and the male was transported to a local trauma centre via emergency run. Unfortunately, upon arrival, that male [was] pronounced deceased and this is now a homicide investigation.”

Williams said a woman in her 60s, who is known to the victim, has since been arrested.

Williams didn’t provide further information on the relationship between the two, but said it’s believed they both lived at the apartment building.

“We believe this to be an isolated incident,” Williams said.

“There’s no further concern for public safety. We have a heavy police presence in the area, still canvassing, looking for any witnesses and any video that may be in the building.”

Williams said a family member may have been the person who made the 911 call.

There is no word on what led up to the stabbing or what charges the woman may be facing.

Williams said investigators are looking at the possibility that this was a domestic incident.

It marks the second reported homicide in Toronto in just over 12 hours. On Saturday evening, two men were shot in Etobicoke, leaving one of them dead.

STABBING: UPDATE
Finch Av E + Don Mills Rd
– police are on scene
– man has succumbed to his injuries
– this is now a homicide investigation
– the suspect is in custody
– there is no threat to public safety#GO614694
^lb