CANNABIS CULTURE – In the summer of 2020, four patients with incurable cancer received psilocybin therapy to treat the anxiety and depression related to their cancer diagnosis.

At least one other person was allowed to use psilocybin to treat her long-standing depression issues by taking part in a similar treatment in November 2020. These patients are given a treatment purified psilocybin in a capsule, or pill, and are carefully monitored by doctors while under the effects.

The new book, Magical Plants: An Honest Look at Psychedelics will explore the history of drugs and plants that were used in both ancient, and modern times. Some of these plants can help us reconnect to our history, to ourselves, and to the people around us. It’s time we follow the example of ancient cultures and find a way to use these psychedelics in a controlled, responsible way to help our communities grow and thrive. 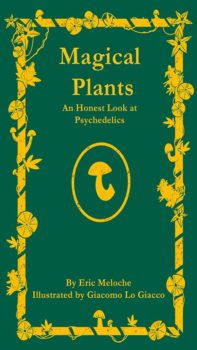 Psychedelics have become the latest breakthrough in mental health treatment. Drugs that were once thought to have no value, like psilocybin mushrooms, LSD, and even cannabis, are now being seen as the next wave of “wonder-drugs” and medicines that might help eliminate mental health problems.

Oregon became the first state in the USA to fully legalize psilocybin for therapeutic use and decriminalize the possession of small amounts of drugs for personal use. During the 2020 election, American voters decided to decriminalize the use of psychedelics in Washington DC, the capital of the United States. Psychedelics have also been decriminalized for personal use in many other U.S. cities and counties such as Oakland, and Santa Cruz in California, as well as Denver in Colorado.

In the USA, 31 states now allow adult use of cannabis in some form, while 33 other states allow medical cannabis use. Four out of five inhabited US Territories have also allowed adult use in some form. The other being American Samoa, where cannabis remains illegal as of 2020.

In Europe, France has begun the process of changing some laws related to cannabis possession. In Spain and the Netherlands, cannabis can be bought from specialized cafes. These are only tolerated by law enforcement, and not actually legal. However, they show a massive tolerance for the use and sale of cannabis in shops.

The Netherlands also allows the use and sale of psilocybin truffles. Which are similar to the standard psilocybin mushroom, but in the form of a truffle. Italy legalized medical cannabis in 2013 and allows the smoking of hemp products as of 2016, which shows a growing tolerance for cannabis use.

Psychedelics are being taken by people across the globe. They have improved the quality of life for millions of people every year. No matter how illegal they became, no matter how many people were sent to jail for using them, no matter how hard governments tried to get rid of them, they were always there. Psychedelic drugs have been with us since the dawn of humanity and will be a part of human life until the very end.

Keeping Up With TCKs and Immigrant Kids

Growing up Mobile: An Interview with Madi Soler