Lucky Ali responds to reports of his death, has THIS to say


On Tuesday, after a fake report of singer-songwriter Lucky Ali’s death surfaced, Twitter was flooded with condolence messages. However, Ali’s friend and actor Nafisa Ali promptly took to the micro-blogging site to quash all rumours about Luck Ali’s death.

And now, the singer himself has responded to his death hoax.

Taking to his verified Instagram handle, Ali shared a health update on his Stories and wrote he was “resting at peace at home.” He also urged people to stay at home and stay safe.

“Hi everyone just addressing the rumours. I’m alive and well and resting in peace at home. Haha. Hope you all are staying in and staying safe. May God protect us all during this devastating time,” read Lucky Ali’s Instagram Story. 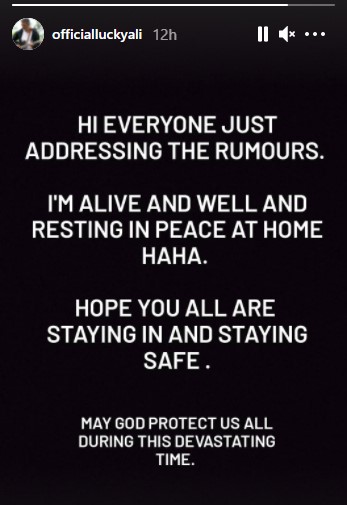 Earlier, when the fake report about Ali’s death started doing the rounds on Twitter, Nafisa tweeted late Tuesday night, “Lucky is totally well and we were chatting this afternoon. He is on his farm with his family. No Covid. In good health.”

Lucky is totally well and we were chatting this afternoon. He is on his farm with his family . No Covid . In good health.

Lucky is currently in his Bengaluru farmhouse, Nafisa told ETimes, “I chatted with Lucky Ali two-three times today. He is fine. He does not have Covid-19. In fact, he has antibodies. He is busy planning his music and concerts. We were talking about virtual concerts happening and all such things. He is on his farm in Bengaluru and his family is there with him. I just spoke to him, everybody is fine.”

Lucky returned to the limelight last year when a video of him during an impromptu jig in Goa went viral on the Internet. He was singing one of his popular romantic numbers, O Sanam.

Talking about it, Lucky told Hindustan Times in an interview last month, “It was something that almost felt like it was going to happen, with the way the world was moving. Something like that was expected, which would change the things and world. And it just happened to be just like that.”