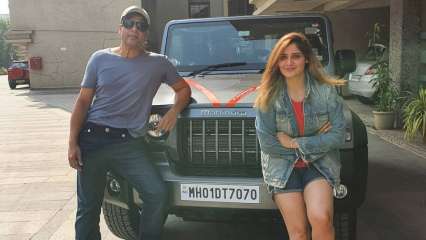 Arti Singh achieved a milestone as she became a proud owner of a swanky car. The Bigg Boss 13 finalist and actor took to her Instagram page and shared a series of photos while posing with her brand new car and beaming with happiness. She was joined by her brother and comedian-actor Krushna Abhishek who also congratulated his little sister. Arti also showed a sense of pride in earning enough to buy a luxurious car.

She wrote, “Jai Guruji Jai Mata Di! Finally, I bought my first car… Well had never thought that I will even earn this much in life to buy myself a car. Sapne dekho fir mehnat karo use pure karne ke liye… I feel so so happy and proud of myself today that I did it. Thank you almighty for everything.”

While Krushna shared the video of the car and captioned it stating, “Congo Arti for her new car! Can’t tell u how happy I am as you have worked hard and on your own. Without taking a single penny from me you bought it. It’s really a proud feeling for a brother. God bless you! Be the way you are, self made @artisingh5 @kashmera1 @raginikhanna @vinayanand786 @ahuja_yashvardhan chalo ab apni bhi ek aur car ho gayi. Actually am only gonna take it on shoots.”

Earlier during an interaction with Bombay Times, Krushna revealed the proud moment of being recognised as Arti’s brother during her Bigg Boss 13 stint. He had said, “When I went to Dubai, Bangalore, even on the streets people stopped me and congratulated me for Arti and the way she’s played the game. She has become famous not because of a character she played on screen but because she showed her real self to the world. I think that’s a big thing and she has come out of the shadow of Chichi mama and me.”