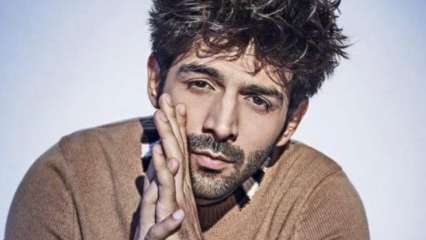 Bollywood celebrities celebrated the festival of Holi within the confines of their home owing to the coronavirus pandemic. However, restrictions did not dam[en their festive spirits and most took to their social media handles to shares photos and videos and to extend wishes to their fans.

Bollywood actor Kartik Aaryan, who had recently tested positive for COVID-19, too wished his fans on Holi. But his wasn’t a usual Holi wish. The actor shared a hilarious post featuring Rajpal Yadav.

Be it his acting skills or his witty social media posts, the ‘Love Aaj Kal’ star leaves no stone unturned to entertain his fans and keep them hooked.

Taking to Instagram, Kartik wished his fans a Happy Holi with a hilarious post from the sets of his upcoming outing ‘Bhool Bhulaiyaa 2’. The snap features Kartik posing confusedly with Rajpal who is seen sporting the look of his iconic comic role from the first part of the movie ‘Bhool Bhulaiyaa’.

What brings a fun twist to the picture is Kartik who has tried the same hairstyle as Rajpal’s character Chota Pandit.

Scores of fans chimed into the comments section and posted laughing emoticons with some wishing him a Happy Holi and fast recovery from the deadly disease.

On March 22, the ‘Pati Patni Aur Woh’ star informed his fans about testing positive for COVID-19. Kartik took to his Instagram handle and shared a graphic of mathematical ‘plus’ sign while revealing the news. He wrote, “Positive ho gaya. Dua karo,” with folded hands emoticon.

Meanwhile, on the work front, Rajpal will be again seen entertaining the audience with his rib-tickling comic role in the sequel of ‘Bhool Bhulaiyaa’ in which Kartik will play the lead role alongside Kiara Advani.

Besides his comic supernatural thriller ‘Bhool Bhulaiyaa 2’, Kartik will also be seen in his much-anticipated crime-thriller ‘Dhamaka’. He also has Karan Johar’s film ‘Dostana 2’ with Janhvi Kapoor in the pipeline.

(WIth inputs from ANI)