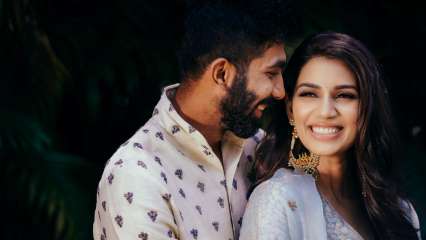 Jasprit Bumrah after ending speculations regarding his marriage has been on a roll since Monday. Since the official announcement, the pictures of his wedding, hali, welcome lunch, sangeet, etc. have been surfacing one after the other and now the recent is their video of the couple dancing together in their sangeet ceremony.

Bumrah, who kept everything under the wraps about his marriage with TV presenter Sanjana Ganesan had opted out of the fourth Test against England citing personal reasons. But, later it was confirmed that Bumrah had indeed taken the break for his wedding.

Now, in the latest video from the couple’s wedding, both Bumrah and Sanjana could be seen matching step-to-step as the groom took the stage in a black sherwani and the bride was in a pink lehenga.

After the announcement, both Bumrah and Sanjana were flooded with congratulatory messages as the couple looked dreamy in their wedding attire.

The wedding took place in Goa and was a close-knit affair as around 50 members from close friends and family attended the wedding.