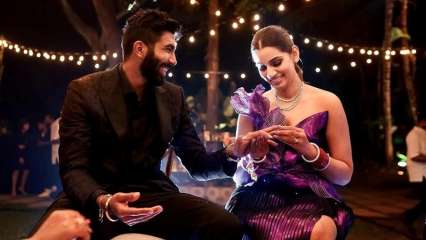 Team India and Mumbai Indians pacer Jasprit Bumrah and TV presenter Sanjana Ganesan have completed one month after tying the knot with each other on March 15 in a private ceremony in Goa. Bumrah, took to Twitter to celebrate the one-month anniversary of his wedding with his best friend, Sanjana.

Bumrah shared a beautiful picture of their ring ceremony on Thursday and wrote, “One month of love, belly laughs, silly jokes, long conversations and peace. One month of being married to my best friend.”

One month of love, belly laughs, silly jokes, long conversations and peace. One month of being married to my best friend. pic.twitter.com/yraFiVTciM

The wedding was a close-knit affair and was attended by family and close friends of the couple.

Bumrah had announced his marriage to the world and said, “Love, if it finds you worthy, directs your course. Steered by love, we have begun a new journey together. Today is one of the happiest days of our lives and we feel blessed to be able to share the news of our wedding and our joy with you.”

Bumrah, had taken a break from international cricket and withdrew his name from the Indian team’s squad when they were playing the series against England, owing to personal reasons, after which he didn’t feature in the limited-overs leg of the tour. While Sanjana, returned to her duties with the hos broadcaster in the ODI series and Bumrah returned to the field in the Indian Premier League (IPL) for his side Mumbai Indians.

If you’re one of the approximately 320 million Americans who don’t live in New York City, it might...
Politics