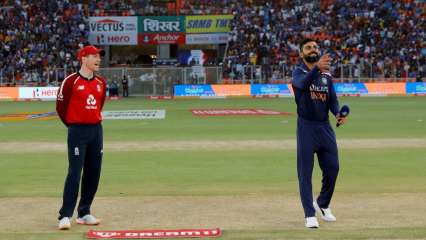 England have won the toss and opted to bowl in the fourth T20I against India at the Narendra Modi Stadium in Ahmedabad. India, on the other hand, made two changes to their line-up as Suryakumar Yadav came back into the side in place of Ishan Kishan who had a niggle, while Rahul Chahar replaced Yuzvendra Chahal.

India, who are trailing in the series 2-1 have an uphill task as they would be batting first again. However, skipper Virat Kohli was of the view that he wanted to bat first looking at the surface, which was probably the best looking one in the series thus far.

Kohli said that their batting first record isn’t that bad in the recent past, but it hasn’t been great in this series especially. Therefore, the Indian batting line-up will have their task cut-out against England’s four-pronged pace attack plus Ben Stokes.