US Senator Bernie Sanders, who is heavily trending on social media for his iconic look at the US presidential inauguration, has now found a spot in one of Deepika Padukone’s latest Instagram post.

On Saturday, in an attempt to participate in the meme-fest, the ‘Padmaavat’ star, much like other netizens, took to her Instagram account to share her version of the viral-meme. She also asked her fans to suggest a caption for the photo of the Senator and her. And the fans fared quite well. One in particular — Ranveer Singh.

While several of Deepika’s fans and followers gave funny captions for the photo, Ranveer too took to the comments section to drop a caption he thought was most suitable. “Namak zara kamm daalna beti (Don’t add too much salt, kid).” 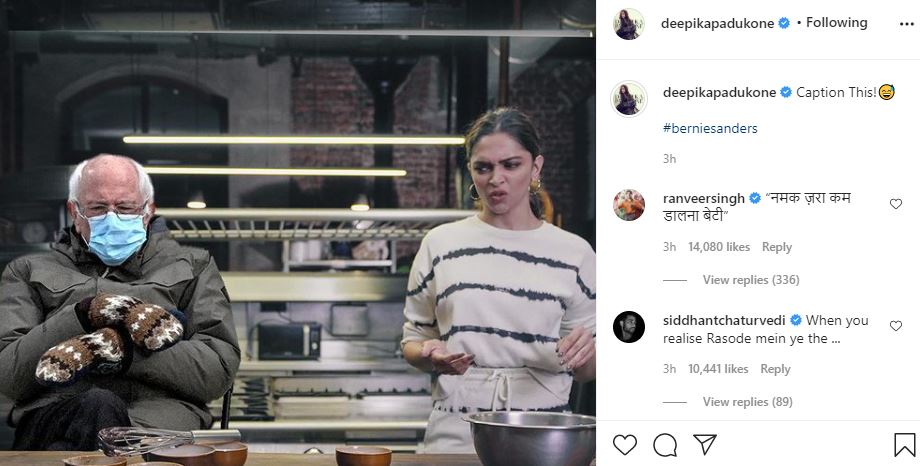 For the unversed, Sanders arrived at the Inauguration event on January 20 in a heavy winter jacket and patterned mittens. A photo of him sitting bundled-up has gone viral on social media, with members having a field day.

Many stars including Priyanka Chopra, Anne Hathaway, Ariana Grande, Hailey Bieber, among several others shared the memes on their Instagram stories.

However, this isn’t the first time that the Senator has gone viral on social media. The politician is also famous for another meme trend in which he wore his coat from the back when he was running for president in the 2020 Presidential Election.

During that time, Sanders released a clip from his campaign trail saying, “I’m once again asking….”People went wild and made the image a fill-in-the-blank, a picture that Time Magazine literally said was one of the most impactful memes of 2020.