Megastar Amitabh Bachchan on Thursday took to his Instagram handle to share a priceless photo of the time when he performed live for the first time which was at Madison Square Garden, New York.

The Hindi film industry icon also shared trivia about his performance at the prestigious world stadium. In his caption, Amitabh wrote that while it was his first performance, it also was the first time an Indian had performed at the venue.

In the picture, one can see a young Amitabh holding a microphone, focussing on his performance. The sign at the back read, “Live tonite Amitabh Bachchan”.

Sharing the throwback photo, Amitabh wrote in the caption, “1983 .. !!! My first LIVE performance .. that signboard at the back is Madison Square Garden New York .. the first-ever Indian performer at this most prestigious World Stadium (sic).”

As soon as the image hit the photo-sharing platform, Amitabh’s granddaughter, Navya Naveli Nanda, who is an avid social media user, was among the first ones to respond to the post.

Navya took to the comments section and dropped a red-heart emoji. 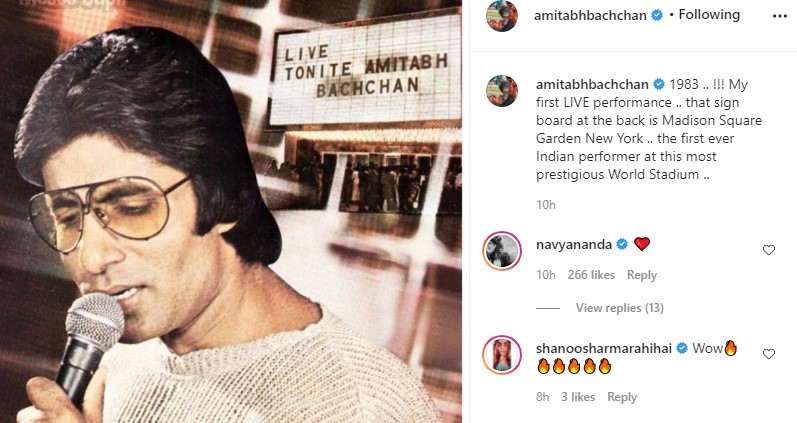 Amitabh’s fans too showered love and dropped heart and fire emojis on the post.

Meanwhile, Amitabh was recently cast for the Indian adaptation of ‘The Intern’ opposite Deepika Padukone. Apart from that, he has films like ‘Jhund’, ‘Brahmastra’, ‘Goodbye’, ‘May Day’ and several others in his pipeline.