Showing off his ‘new acquisition’ on social media, the megastar on Tuesday extended Republic Day wishes to his fans while sporting the high-tech mask.

As he speaks further, he fastens the mask behind the other ear to fully cover his face, and is heard saying, “Happy Republic Day to all of you.” He then repeats the same message n Hindi. Big B can be seen ending the video by folding his hands and laughing wholeheartedly. As he speaks, his face-mask lights up in sync with his words.

Amused by this several of Big B’s fans left ‘fire, heart, face with tears of joy and nice’ emojis on the comments section of the post.

Among the many comments, a special one from his granddaughter Navya caught everyone’s attention. She wore, “Hahahahahaha love it,” while his grandson Agastya Nanda dropped a laughter emoji. Actors Shilpa Shetty Kundra and Mouni Roy also reacted with emojis. 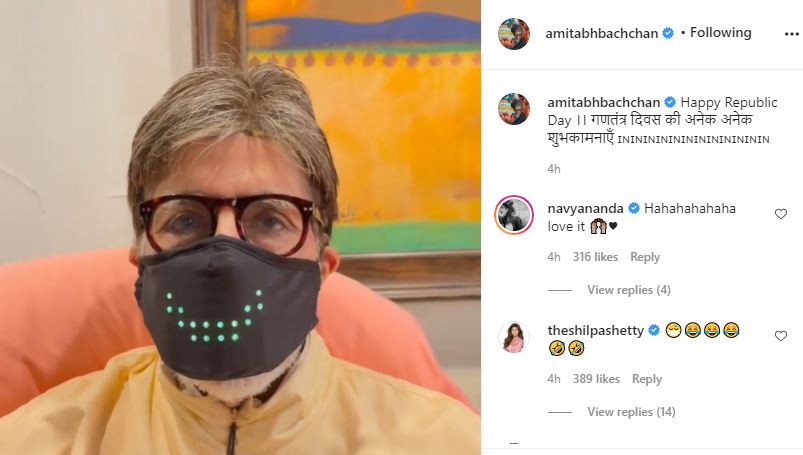 For the unversed, Navya Naveli Nanda recently made her Instagram account from private to public. And even though Navya isn’t associated with the Hindi film industry personally, her background makes her a celebrity in her own right. Probably the reason why she enjoys a massive social media fan following.

Meanwhile, on the work front, Big B, who recently wrapped up the shoot of KBC 12, has a long list of films in his kitty including ‘Mayday’, ‘Chehre’ and ‘Brahmastra’. He also has Deepika Padukone and Prabhas starrer yet untitled film in the pipeline.