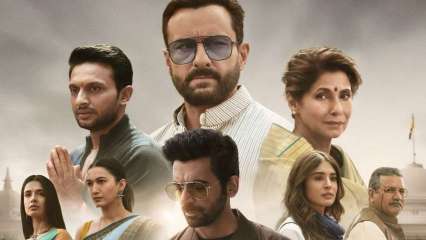 It also said that it has removed “scenes that were objected to”.

“Amazon Prime Video again deeply regrets that viewers considered certain scenes to be objectionable in the recently launched fictional series Tandav. This was never our intention, and the scenes that were objected to were removed or edited when they were brought to our attention. We respect our viewers’ diverse beliefs and apologize unconditionally to anyone who felt hurt by these scenes. Our teams follow company content evaluation processes, which we acknowledge need to be constantly updated to better serve our audiences. We will continue to develop entertaining content with partners, while complying with the laws of India and respecting the diversity of culture and beliefs of our audiences.”

A single-judge bench of Justice Siddharth passed this order on Thursday while hearing an anticipatory bail application.

The allegation in the FIR lodged against the applicant and six other co-accused persons is that a web series is being shown on Amazon Prime Video, which is an online movie OTT platform, has objectionable content.

The web series is being shown through Amazon Prime Video through Head of India Originals, as paid movie. The movie has been directed by co-accused, Ali Abbas Zafar.

The content of this movie is affecting the image of the Uttar Pradesh police adversely. In a Dial 100 police vehicle, two actors are shown travelling with open doors in a police uniform, consuming liquor and hurling abuses.

It is also seen that Hindu gods and goddesses have been depicted in a bad light with the intention of inciting communal sentiments.

The post of Prime Minister has been depicted in a manner which will adversely affect the democratic system of the country. Caste and community related utterances have been made deliberately so that it may affect the public peace.

Similarly, utterances have been made against the state police, public administration and the constitutional posts so that the element of hate is developed between the communities and there are scenes which show disrespect for the scheduled castes.

All this has been deliberately done to make the web series controversial and gain publicity for the purpose of commercial gain.

The FIR has been lodged against the producer/director and actors/actresses of the movie series.

Aparna Purohit’s counsel submitted that the web series in dispute is a work of fiction and all the places, events, characters and incidents are imagination of the author.

A disclaimer is included in the movie in this regard. The cast and crew of the web series Tandav has already issued an unconditional apology and have removed the offensive scenes.

Notices have been issued to the opposite parties, leaving it open for the accused persons to approach the High Court of the state for grant of bail/anticipatory bail. Hence, the applicant sought bail from Allahabad high court.

The state government, meanwhile, vehemently opposed the application. He has submitted that total 10 FIRs and 4 criminal complaints have been filed relating to the disputed web series in the country.