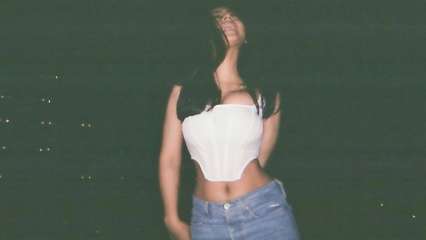 Ajay Devgn and Kajol’s daughter Nysa Devgan is currently in Singapore where she is completing her schooling. Although she has a private Instagram page, there are several fan clubs dedicated to her who share updates on her now and then. Now, we came across a video of Nysa with her classmates performing at a school event on the hit song which also features her mother and actor Kajol.

Yes, we are talking about the Kabhi Khushi Kabhie Gham chartbuster track ‘Bole Chudiyan‘ picturised on Shah Rukh Khan, Kajol, Hrithik Roshan and Kareena Kapoor Khan. The song also features Amitabh Bachchan and Jaya Bachchan. In the video shared on Instagram, Nysa is shaking her leg with her classmates wearing a knotted white top and a jazzy skirt.

Not just ‘Bole Chudiyan‘, they also dance on SRK and Kajol’s My Name is Khan songs ‘Sajda‘ and ‘Tere Naina‘. Finally, she shows her solo dance on ‘Nagada‘ song from Jab We Met and then joined by others.

Meanwhile, earlier in a video shared by Kajol, Nysa had addressed the negativity of being a subject to trolls by stating, “Especially growing up with the attention, even though my parents pretty much made me blind to it, there was no concept of me understanding why people knew who they were.”

Talking about the advice she got from Ajay, Nysa went on to share, “One of the pieces of advice that my dad gave me was my silence made me complicit. He always made me believe that I can do anything if I work hard for it.”