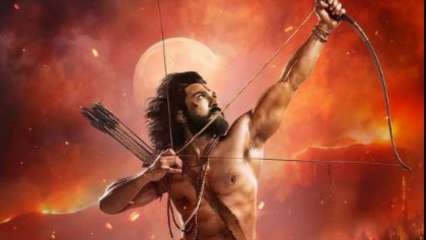 The makers of the upcoming magnum opus ‘RRR’ on Friday dropped their second character poster featuring Telugu actor Ram Charan Teja in a fierce look. The first one featured Alia Bhatt as Sita.

This comes a day ahead of the 35-year-old actor Ram Charan’s birthday who is set to play the lead role of ‘Rama’ in the film. The gripping poster sees Charan aiming -towards the sky with a bow and arrow. He is seen donning a saffron dhoti and sported a full-grown beard look. The actor is seen shirtless as he showcased his chiselled biceps and triceps as he stretches the arrow with full force.

Teja is seen donning a fierce look, and in the backdrop, one can catch glimpses of a raging fire in the forest.

‘Baahubali’ filmmaker SS Rajamouli took to Instagram to release the poster and wrote, “The man of bravery, honour and integrity. Presenting my #AlluriSitaRamaraju to you all… #RRR #RRRMovie.”

Ram Charan also shared the same poster on his social media accounts, he wrote in the caption, “Bravery, honour and integrity. A man who defined it all! It’s my privilege to take on the role of #AlluriSitaRamaraju #RRR #RRRMovie.”

‘RRR’ in the title of the film stands for ‘Rise Roar Revolt’.

Earlier, on the occasion of Alia’s 28th birthday, the actor’s beautiful look as Sita from the film was dropped by the makers. In the photo, Alia looked drop-dead gorgeous wearing a green silk saree with a red organza blouse. She sported curly hair tied it into a braid. To complete her look, Alia donned a simple maang tikka, a nose ring and gold chains. Jhumkas and a red bindi completed her ethnic look.

Take a look at Alia’s look from the film here:

The much-talked-about film will release in multiple languages on October 13 this year.