The Australian crowd, who racially abused Indian cricketers were silenced by the Men in Blue after the side breached the Gabba fortress and won the series Down Under 2-1, that too with an injured squad.

Rishabh Pant, the name is enough to prove how vital the wicketkeeper-batsman was to help India clinch the Border-Gavaskar Trophy. The heroes have, however, landed back and are resting before they prepare for the upcoming England series at home.

While these cricketers are relaxing, they are even active on social media. Pant too has been sharing pictures on his social media accounts. So when he shared a pic of him wearing a sweatshirt having the cartoon character Tom of ‘Tom and Jerry‘ on it, internet’s witty man Yuzvendra Chahal could not keep calm.

Pant captioned the picture saying, “How many of you have watched this cartoon on my T-shirt”

As soon as the picture was uploaded, Chahal took the opportunity to make sure to reply to the wicket-keeper saying, “You or Tom bro?” The reply surely got all fans laughing gaining a lot of comments and likes. 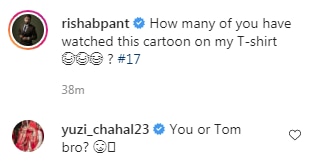 The Indian Cricket Team has landed back home after breaching the Gabba fortress and capturing the Border-Gavaskar trophy. Now, they will take on England in their own backyard, with the first Test of the four-match series beginning from February 5 at Chennai.

The last two Test matches will be played at the Motera Stadium in Ahemadabad, followed by the T20I series being played at the same venue. The tour will come to an end after the 3-match ODI series at Pune.