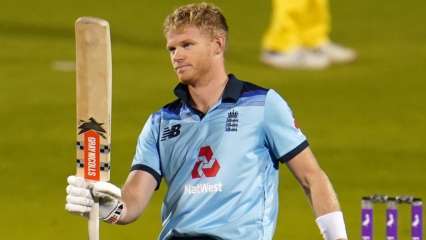 After completing the ODI series, members from the Indian and England side departed to their various Indian Premier League (IPL) camps as the 14th edition is all set to begin from April 9.

England’s wicketkeeper-batsman Sam Billings, who is part of Delhi Capitals (DC) in the 2021 edition reached the team hotel on Monday, March 29 in Mumbai. The Delhi side will be playing against Chennai Super Kings (CSK) in their opening match on April 10 at Wankhede Stadium. Hence, all players are staying at the Taj Mahal Palace in Mumbai.

However, Billings isn’t experiencing an ideal stay as he is facing WiFi issues in his hotel room. The 29-year-old soon took to his official Twitter handle and asked fans for suggestions regarding a good dongle.

“Hotel WiFi is non existent….Best WiFi dongle to buy and use in India please?” Billings tweeted.

Best WiFi dongle to buy and use in India please? pic.twitter.com/xWhfnUBpoM

Soon after, Billings started a poll on Twitter and Indian citizens did not disappoint. The right-handed batsman was suggested companies whose dongle will be worth the money. In the poll, Billings asked fans to choose between Jio Dongle and Airtel Dongle after he received the two as the major suggestions.

“Only one way to decide…Jio or Airtel WiFi Dongle?” the keeper wrote.

Only one way to decide….

As for Billings, he had arrived in India for the white-ball leg between India and England. However, he could play only a solitary ODI at the MCA Stadium in Pune.

When it comes to the IPL, the Board of Control for Cricket in India (BCCI) will be hosting the 14th edition of the Indian Premier League (IPL) in India from April 9 to May 30 across six venues – Ahmedabad, Bengaluru, Chennai, Delhi, Mumbai, and Kolkata.

This time the teams won’t be playing any games at their home ground as BCCI has decided to conduct the games at neutral venues to eliminate the home advantage.