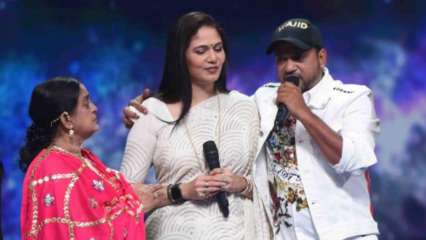 While the world of sports has seen several league competitions, Zee TV’s unique music league, the Indian Pro Music League, has six teams representing different regions of India, battling it out against each other in a musical championship.

While the competition heated up during Saturday’s episode of Indian Pro Music League with all the teams putting their best foot forward, the Wajid Khan special also had many light moments with all the stars sharing some heart-warming anecdotes about the late musician.

In fact, Sajid-Wajid’s mother, Razina, and Sajid’s wife, Lubna also appeared on the show as special guests and a video tribute of them for Wajid had a very special revelation.

Wajid’s mother revealed a time when the late musician was in dire need of a kidney.

Being a diabetic patient, she couldn’t give her kidney, but they were still hopeful of finding a match. However, as time went by, they were losing hope, especially with people cheating them and not helping them out. That’s when Sajid’s wife Lubna went behind everyone’s back and gave her kidney to Wajid.

As Razina revealed, “We had asked all our relatives, however, no one came forward, but during that time, Lubna secretly got all her tests done and gave him her kidney. In today’s time, even parents don’t give a kidney to their kids, but she gave it without thinking twice.”

Lubna added, “When I heard that someone else can also donate him a kidney, I didn’t ask anyone, just got all the tests done. Before the last test, I told Wajid everything and told him that if we’re a match, we’ll go for a transplant. He was very upset, but I told him one thing that you’re very important to me, and that left him speechless. The person who has always stood by everyone, if his family doesn’t stand by him in his time of need, then it is very shameful. Thankfully, we were a match. Sajid, my mother, and my children were very supportive, and I am happy I could do this for him.”

Delhi Jammers captain Sajid mentioned further, “Wajid was unwell for two years and my mom took care of him on a daily basis. We requested her to go home and rest, but she never left the room where Wajid was living. There was a time when my wife went to the hospital, got all the paperwork done, and was ready to give Wajid her kidney. I was scared, even my kids were worried, but I am really proud of what she did.”

He added, “At that time, none of our family members tried to help us. We had money, name, fame, and we went to the best doctors, but we couldn’t get the right match of a kidney. People took money from me saying I will donate my kidney and then they just disappeared. I used to wait at the airport for hours for people to come, but they’d never turn up. I had never felt so helpless in my life. That is when Lubna came to me and said I want to donate my kidney to Wajid, which she did. All I am trying to say through this is that we all are blessed to have a family that loves us, and we don’t need anything more than that in life. We should spend time with them, love them and be there for them always.”