Hardik Pandya, one of India’s best fielders, dropped a sitter in the third ODI against England that too of the marauding left-hander Ben Stokes. In the fifth over of the innings of the third ODI, Bhuvneshwar Kumar bowled a length ball on off and Stokes, looking to play a check drive with a straight bat, got it higher on the bat and lofted it high in the air.

Hardik came across, had it covered and then somehow allowed the ball to burst through his hands. Stokes’ bat turned as he played the shot as the timing wasn’t there as he spooned it in the air down at mid-off’s throat, however, Hardik, even after covering the ground pretty well, could hold on to the catch in a huge miss for the team as Stokes was the one who punished the errant Indian side in the last game.

But, thankfully for Hardik and Team India Stokes didn’t make them pay much as he was dismissed by pacer T Natarajan getting him caught on the leg-side boundary for 35.

After the dropped catch, what caught the viewers’ attention was the reaction by Hardik’s teammates to the drop as it was a huge huge wicket. Skipper Virat Kohli, vice-captain Rohit Sharma and the team’s dugout starting with bowling coach Bharat Arun were all shocked as they couldn’t believe their eyes. Given that Hardik is one of the safest fielders in the team, all of the players, except the bowler Bhuvneshwar, were stunned after he dropped the catch.

Take a look at the team’s shock: 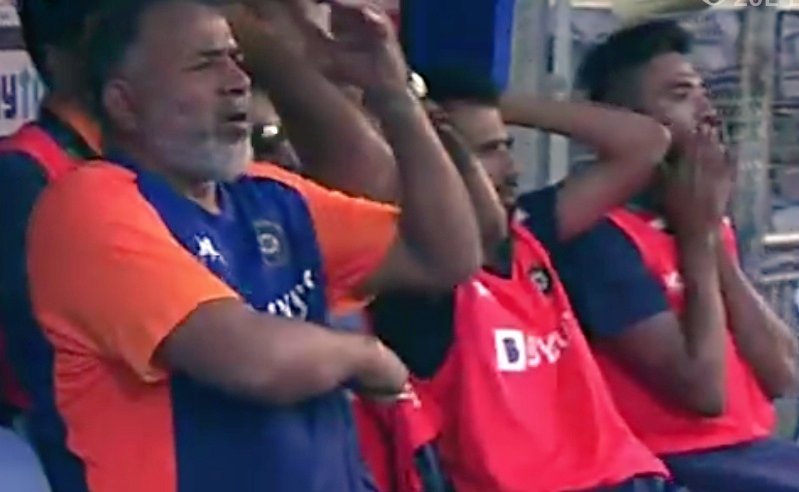 Pandya brother wanted to feel like an Akmal brother for a moment.#INDvENG #INDvsENG

That drop from Hardik was classic ego over ability. In his head it was caught before he had it and, ultimately, he absolutely fluffs it.

I’ll say it again – he is nowhere near as good as he thinks he is.#INDvENG #bbccricket