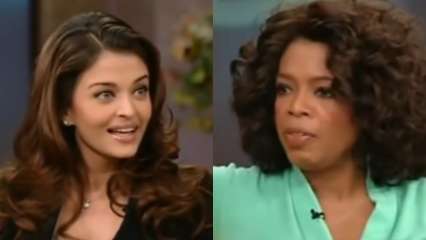 Aishwarya had appeared on Oprah’s show back in 2005 and expertly answered all questions about sexuality, arranged marriages, the English language, perceptions of American women in India, and skin colour.

Speaking about kissing in public, Aishwarya had said, “It’s not really a familiar sight. People kiss, but it doesn’t happen around the street corner. It’s a more private expression of emotion, so I guess art imitates life and that comes across in our cinema.”

Oprah had then also questioned Aishwarya about ‘sex out of marriage’ and whether it was taboo to which the global star had said, “Broadly speaking, it isn’t the good thing to do.”

Speaking arranged marriages, she explained, “Arranged marriages in urban India would be like a global dating service where the families study each other’s backgrounds, and they bring (the) couple together, and they get engaged and they date and if it works they get along with the alliance, and if it doesn’t work they fall out.” Aishwarya had returned on Oprah’s show again in 2009 with her husband Abhishek Bachchan.

In other news, after her recent interview with the Duke and Duchess of Sussex Prince Harry and Meghan Markle respectively, Oprah is all set to sit down for an intimate conversation with Priyanka Chopra Jonas to talk about her lately released memoir, ‘Unfinished’.

Premiering March 20th on discovery+ as part of the all-new slate of “Super Soul,” hosted by Oprah Winfrey and produced by OWN, this thought-provoking, and thrilling interview will give audiences a closer look into Priyanka Chopra Jonas’ journey of self-discovery, her marriage to Nick Jonas and her New York Times best-selling memoir, “Unfinished.”