Body shaming, passing lewd comments under the garb of faceless eggs, and spreading hate and negativity online is not new to the social media world. And the latest target of this online obscenity is television actress Sayantani Ghosh.

Taking to her Instagram handle, Sayantani on Wednesday shared a strong message about body positivity and narrated an incident when a social media user asked her, her bra size in a recent interactive session on the ‘gram.

Though she gave a ‘befitting reply’ to the user during the session, in her post, Sayantani said she felt the need to talk about it. 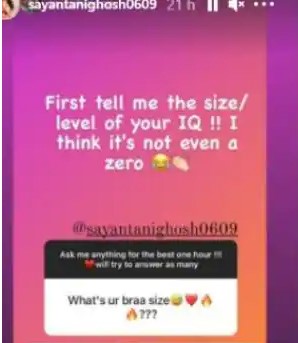 In a long Instagram note, Sayantani wrote, “Yesterday in one of my interactive sessions someone asked me my bra size! Though I gave that person a befitting reply. Still, I feel there is so much more I want to talk about. As any form of Body-Shaming is bad. But I struggle to wrap my head around the fact that what is the fascination towards female BREASTS? As to what size it is? A cup, B, C, D etc? And it’s not only the boys, even we girls have this sort of a conditioning!”

Her note further read, “There are few parts to such mental conditioning…1.Why it is so difficult to accept that it’s just another body part? “I know it has a meaning when it comes to a nursing mother or certain purposes of passion but in the isn’t it another body part? What we don’t realize is that such perspectives or hype over the female breast, throw few of us women, in fact, more women get into a very bad headspace.”

Her next slide read, “2. Where is the concept of self-love and self-acceptance? Few of us who are well-endowed start feeling conscious about it, and start hoping that ‘I wish I was flat or small chested’ and few of us feel the need for implants’.”

“3. It’s time to stop: The next part of my thought is, who gives such rights to men? Why do men feel you are entitled to look at a woman this way or talk to her this way? Maybe it’s us…yes girls it’s us for tolerating this shit and not speaking up!,” read a part of Sayantani’s post.

Sayantani concluded her post on a positive note urging women to love, accept and respect themselves.

In conclusion, she also mentioned that now she knows the answer when a man asks her cup size. “Honestly I like a large cup – well obviously being a coffee lover I would like a large cup of coffee,” read a part of her post.