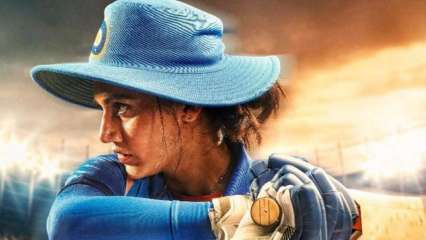 Taapsee Pannu is all set playing the role of Indian skipper Mithali Raj in the upcoming biopic titled ‘Shabaash Mithu’.

The actor who has started prepping for the role is leaving no stone unturned in getting into the cricketing skills of Mithali. However, owing to the pandemic the film, which was earlier scheduled to release in February, got postponed. A new release date is yet to be announced.

Meanwhile, on Friday, Taapsee took to her verified Instagram handle and shared a BTS photo where the ‘Badla’ star can be seen practising to bat.

“People throw stones at you and you convert them into milestones” – Sachin Tendulkar#GettingOnWithIt #ShabaashMithu #MithaliRaj #EyeOnTheTarget (sic),” Taapsee captioned the post.

In the image, Taapsee can be seen practising at the nets. She is seen taking a firm stance, concentrating to hit the ball while holding a bat in her gloved hands.

Take a look at the image here:

Nooshin, who has been a long-time friend and former teammate of Mithali Rajis expected to teach the actor Mithali’s iconic cricket style apart from the other finer aspects of emulating the ace cricketer on-screen, such as her poise, stance, and unique traits.

And even though both the individuals — Taapsee nd Mithali — hail from starkly different professions, they have many similarities.

Elaborating on this, Nooshin said, “Taapsee is extremely dedicated and her commitment to playing cricket like a professional is commendable. It is heartening to see so many common traits between Taapsee and Mithali like dedication, a go-getter attitude and tenacity.”

Directed by Rahul Dholakia and written by Priya Aven, Shabaash Mithu revolves around the life of Indian Women’s ODI Cricket Team captain, Mithali Dorai Raj, who is considered a beacon of women’s cricket across the world. The film is being produced by Viacom18 Studios.