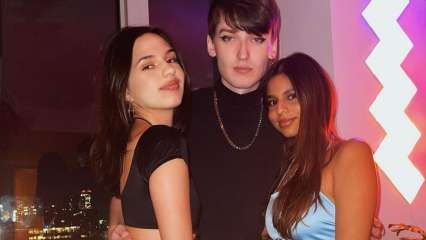 Shah Rukh Khan and Gauri Khan’s daughter Suhana Khan is enjoying her time in New York City to the fullest. After being home in Mumbai nearly for a year, the star kid has resumed classes at NYU. Along with that, Suhana is also catching up with her friends by partying and chilling with them during the weekends. Khan treats her followers with her cool and stylish photos while posing with friends.

On Sunday, Suhana posted a photo on her Instagram story in which she is seen wearing a blue co-ord set. The star kid donned a strapless sky blue crop top with a matching body-hugging skirt. Suhana posed with her friends and is all smiles while getting clicked.

Meanwhile, Suhana is SRK’s pampered daughter as the superstar often shares how he is in awe of her. Earlier during an interaction with David Letterman, Shah Rukh had said, “I sort out all their problems and hate it when they have boyfriend/girlfriend problems. I just want to say ‘kick that person out’ but you know then I say, ‘in life, it happens that you have to give and take in relationships darling.’ I hate explaining it to her. I want to tell her this guy is no good. But I have to sometimes choose presents for him which is like the worst thing possible. ‘Papa, what do you think he’ll like?’ Oh, he’ll like a ‘enacts punch’ on his face.”

Suhana is completing her education at The New York University Tisch School of the Arts.