Soha Ali Khan and Kunal Kemmu have been keeping their fans updated by sharing photos and videos from Soha’s ancestral home, the Pataudi Palace. Soha has been living in Pataudi for some time with her daughter, Inaaya Naumi Kemmu and it seems that Kunal has now joined them there. 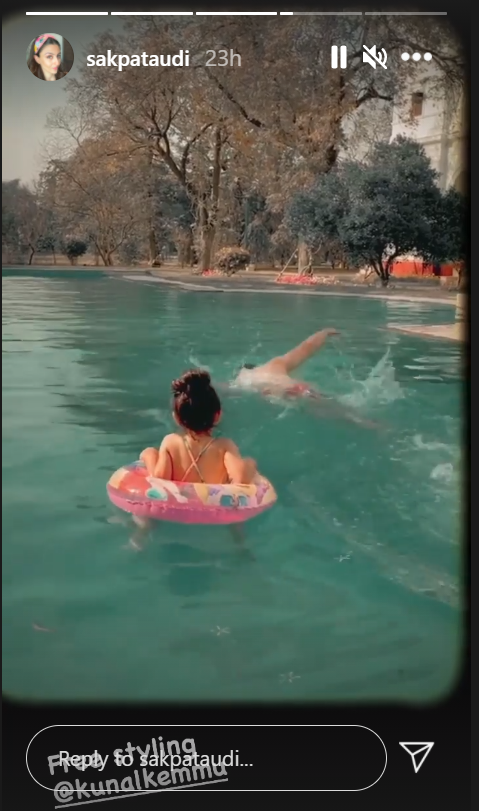 Soha and Kunal have been sharing numerous photos of the Pataudi Palace on their Instagram posts and stories including pictures of its vast grounds, the hallways, and the property’s massive swimming pool. Pictures also showed Inaaya playing with the dogs and swimming in the pool with Kunal.

Earlier, in March, Soha had posted a picture of her mother, Sharmila Tagore, and Inaaya spending some quality time together. Soha had also posted a photo of herself and Inaaya, playing with a lamb. She captioned it saying, “I goat this…”

For the uninformed, Sharmila Tagore spent most of the lockdown period in Dekhi and Pataudi. In April last year, Soha’s brother, Saif Ali Khan, had spoken about his mother and said, “I do worry about my mother, but she is suddenly sounding extremely wise, saying she has had a full life and has no regrets. It’s scary, listening to such stuff,” he had told Mumbai Mirror.

Pataudi Palace has been used in the past to shoot Shah Rukh Khan and Preity Zinta starrer ‘Veer Zaara’ and Amazon series ‘Tandav’, starring Saif. The palace is a heritage property and has been seen in several films too including Hollywood. It is being reported that Saif Ali Khan and Kareena Kapoor Khan’s palace is valued at Rs 800 crore and has about 150 rooms.