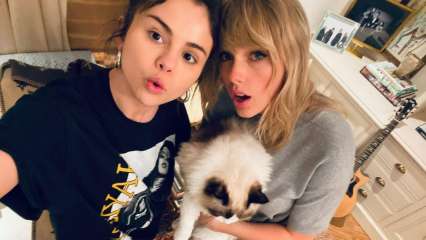 When two contemporaries are pitted against each other people expect a long-standing feud, public fights and more. But Taylor Swift and Selena Gomez have come a long way and never stop supporting each other. They even shunned the cold war between them by starring together in the hit music video ‘Bad Blood‘. Now, Selena dropped a major surprise for ‘Taylena’ fans by sharing selfies posing with Taylor.

In the photos, both the singers-songwriters are seen posing with the pet cat while lazing around in their PJs. Swift is seen in a green T-Shirt dress and white shoes, while she held the cute feline. Whereas Selna wore a black T-Shirt and matching track pants with white sneakers. The ‘Come And Get It‘ singer captioned her post stating, “kinda missin this one.”

Earlier while talking about their friendship, in an interview with KIIS FM UK back in 2017, Selena stated, “We actually dated the Jonas Brothers together! It was hysterical. It was amazing because she was the girl with the big curly hair and all the bracelets and the cowboy boots. And I was definitely up-and-coming, and we just clicked. It was the best thing we got out of those relationships.”

While in 2009, Gomez revealed that she turned to Taylor with her every problem. Selena narrated, “Every single problem I ever have is healable by Taylor Swift. If I ever have an issue, Taylor has gone through it, because she’s older than me, and she gives the most thought-out answers. And what I love about Taylor is that she does believe in the whole love story and Prince Charming and soul mates. Because of her, I haven’t lost faith. We literally talk every day.”