Seen it yet? Karisma Kapoor has got a doppelganger and she is indeed a spitting image of the actor 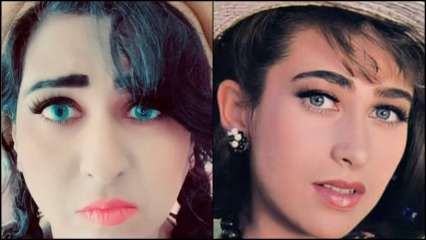 Thanks to the Internet, we have been getting to see the doppelgängers of several celebrities. The lookalikes of the celebs are not just in India but are found across the globe too. After doppelgängers of Aishwarya Rai Bachchan, Anushka Sharma and many others, we got our hands on an Instagram page where the lady is a spitting image of Karisma Kapoor. The Instagram user going by the name ‘Heenaakh1’ has shared several videos where she is a strikingly uncanny resemblance with Lolo.

Not just that, netizens have even called her ‘Kudrat ka Karisma‘ as they can’t believe how similar she looks to the actor. Heena has been posting several videos performing on Karisma’s iconic songs and giving exact expressions like her. She shares closeup videos and wears similar outfits which Kapoor wore in her movies. From Saajan Chale Sasural to Raja Hindustani, Heena has danced on most of the hit songs and mouthed popular dialogues of Karisma on her Instagram page.

Check out a few videos below:

Isn’t that shocking and astonishing?!

Meanwhile, on the work front, Karisma was last seen in her digital debut with which she made her acting debut after eight years. The actor played the lead in Alt Balaji and ZEE5’s Mentalhood created by Ekta Kapoor.

In the web series, the actor starred alongside Sanjay Suri, Dino Morea, Sandhya Mridul, Shilpa Shukla, Tillotama Shome and Shruti Seth. The show streamed in 2020 and was an instant hit among the masses.

There’s no confirmation on the second season as of now.