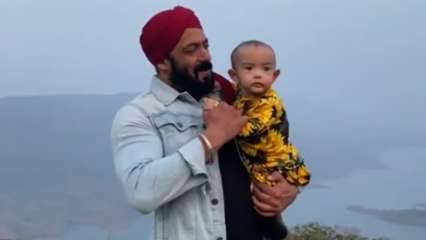 Salman Khan loves his nephews and nieces unconditionally and there are several instances of the same. Arpita Khan Sharma and Aayush Sharma’s daughter Ayat Sharma is now the apple of the superstar’s eyes. There are many photos and videos on the Internet of Salman with baby Ayat which are too cute for words. On Friday, Arpita took to her Instagram page and shared an adorable video featuring the star with his niece.

In the video, Salman is donning a turbaned look which is for his film Antim: The Final Truth while holding Ayat in his arms. The video has the Bajrangi Bhaijaan song ‘Tu Jo Mila‘ in the backdrop. Salman is seen dancing with Ayat while she is staring right into the camera. Arpita captioned the video stating, “Unconditional Love @beingsalmankhan.”

Salman also reshared the video on his Instagram page and has more than two million views till now.

Interestingly, Salman and Ayat share the same birthday – December 27. Earlier, during an interaction with Hindustan Times, when Aayush was asked about bringing Ayat into the world on Salman’s birthday, he had said, “When we told this to everyone, Bhai (as Salman is lovingly called) was excited and said ‘give me a gift’. So, it was a conscious decision to bring Ayat into this world on that day. It is a very good omen to have her on Bhai’s birthday.”

He also said, “Also, it saves me from giving multiple parties! Arpita has a habit of throwing lavish parties, so I was anyway thinking how much I’ve got to earn to celebrate hers, mine, Ahil’s (three-year-old son), and Ayat’s birthdays.”