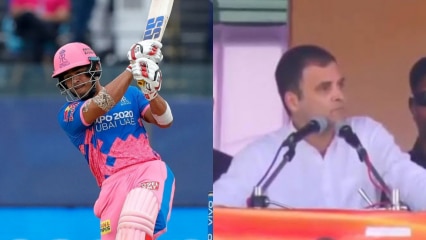 After the BCCI decided to postpone the 2021 edition of the Indian Premier League (IPL) on Tuesday due to a rise in COVID-19 cases in the bio-bubble, many cricketers who were part of the lucrative tournament have expressed their views on the suspension.

After two cases in the Kolkata Knight Riders camp and a few cases in Chennai Super Kings camp including that of bowling coach Laxmipathy Balaji and batting coach Michael Hussey, two new cases emerged out of the iPL bubble, one from Sunrisers Hyderabad of wicket-keeper batsman Wriddhiman Saha and one from the Delhi Capitals, of leg-spinner Amit Mishra.

The BCCI and the IPL Governing Council had to make a decision before the cases spread like a wildfire in the bubble and decided to postponed the ongoing season keeping everyone’s health in mind andare now looking at a date in September for the resumption.

Rajasthan Royals’ 19-year old batsman Riyan Parag took to Twitter on Tuesday and wrote, ‘Khatam,tata, bye-bye’, which is a famous dialogue by Member of Parliamanent and Indian National Congress Rahul Gandhi during one of his speeches.

Parag’s response invited a hilarious meme-fest on Twitter regarding the same. Here are some of the reactions:

Rajasthan Royals reaction on ipl cancel as after a break Archer and Stokes could join them…. pic.twitter.com/N32IjrOg0g