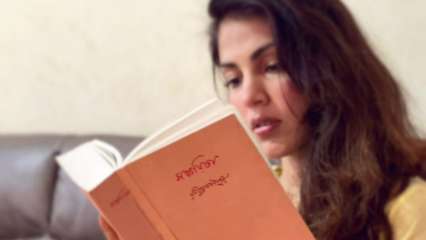 After the death of Sushant Singh Rajput, Rhea Chakraborty seldom shares posts on her social media pages. The actor has gone through an arrest by NCB and is also in the middle of the ongoing death case of SSR. On Sunday, Rhea took to her Instagram page and shared her candid click while reading Sanchayita Rabindranath Tagore. The actor is reading the book in Bengali and while sharing the caption she shared a quote in Hindi.

In the photo, Rhea is seen wearing a yellow kurti and sitting on a couch. She wrote, “‘The question and the cry ‘oh, where?’ melt into tears of a thousand streams and deluge the world with the flood of the assurance, ‘I AM!’ – Rabindranath Tagore, Gitanjali #keepingthefaith.”

About a week back, Rhea had shared a throwback photo posing with her friend and producer Nidhi Parmar Hiranandani. She captioned the photo stating, “#LOVEISPOWER ‘Love is a fabric which never fades, no matter how often it is washed in the water of adversity and grief’- Rober Fulghum.”

Meanwhile, on the work front, Rhea will next be seen in Chehre starring Amitabh Bachchan and Emraan Hashmi in the lead roles. The actor had a blink-and-miss appearance in the trailer.

During an exclusive interaction with DNA, when producer Anand Pandit was asked about Rhea’s sequence as a marketing strategy, he said, “Not really. As I have mentioned earlier, a lot of turmoil has happened in her life and we wanted to give her a little bit of space. And it is not Rhea Chakraborty’s film, it’s Mr Bachchan and Emraan Hashmi’s film. So, naturally, our focus is on that. But, as a gesture, because all our artists should be there one by one, so, she appeared in the trailer. It was not a part of a strategy. And we didn’t want to ride on anyone’s agony. We have enough stalwarts in the film.”