Repeat of 2011! India-Sri Lanka final in India and hosts win the tournament, again 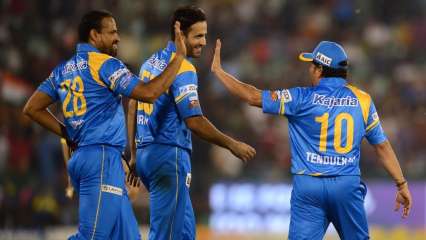 India Legends defeated the Sri Lanka Legends in the final of the Road Safety World Series 2021 by 14 runs to clinch the title. Pathan brothers, Yusuf and Irfan, starred for the India Legends with both bat and the ball as they helped their side get some extra runs at the back end of their batting innings and were the chief contributors with the ball after Sanath Jayasuriya and Tillakaratne Dilshan were off to a flier for the opposition.

India Legends were behind the eight-ball as Sri Lankan openers had a great start to their innings as they raced to 60 runs off just seven overs. India desperately needed a breakthrough and the off-spinners of senior Pathan provided the same as he sent back the opposition captain Dilshan.

The wicket started a procession as Sri Lanka kept losing wickets in regular intervals from there on and the wrecker-in-chiefs were the Pathan brothers from Baroda. The senior Pathan got rid of Dilshan and Jayasuriya, while Irfan dismissed Chamara Silva and Upul Tharanga.

Thereafter Chinthaka Jayasinghe and Kaushalya Weeraratne tried their best with innings of 40 off 30 balls and 38 off 15 balls, respectively but it was the hosts, who prevailed in the end and won the game by 14 runs.

Earlier, owing to senior Pathan’s blitzkrieg of unbeaten 62 runs off just 36 balls and an explosive innings from all-rounder Yuvraj Singh of 60 runs off just 41 balls, India Legends recovered from 78/3 in 11th over to score 181/4 in their 20 overs.