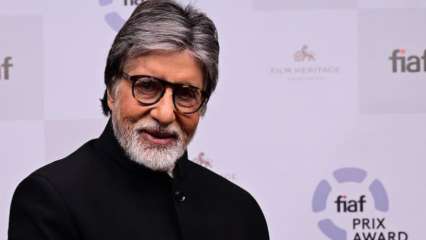 Amitabh Bachchan penned a heartwarming note for the film industry after he got conferred with the 2021 FIAF Award by The International Federation of Film Archives (FIAF), the organisation of film archives and museums from across the world, at a virtual ceremony held on March 19.

On Instagram, 78-year-old Bachchan posted a picture of him from last night after he received the accolade. Taking it to the captions, Bachchan wrote, “I am deeply honoured to have been conferred with the 2021 FIAF Award. Thank you to FIAF and to Martin Scorsese and Christopher Nolan for bestowing the award on me in the ceremony today.”

“Our commitment to the cause of saving India’s film heritage is unshakeable and Film Heritage Foundation will continue its efforts to build a nationwide movement to save our films,” he concluded.

Iconic filmmakers Martin Scorsese and Christopher Nolan, who have been previous recipients, gave the award to Big B for his contribution to the preservation of and access to the world’s film heritage for the benefit of present and future generations.

Bachchan was nominated by the FIAF-affiliate Film Heritage Foundation, an Indian film archival organisation founded by filmmaker and archivist Shivendra Singh Dungarpur. He said that Bachchan “constructively wielded his influence to amplify the cause on a war footing,” in South Asia and that he was the unanimous choice of the 172 FIAF-affiliated archives for the award.

Congratulating Bachchan, Nolan said, “He has played an essential role in putting the cause of film preservation on the map in India and the subcontinent.”