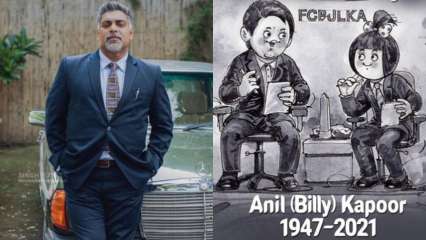 Popular film and television actor Ram Kapoor’s father Anil Kapoor, a renowned businessman, died on April 12 at the age of 74. He was battling cancer.

Taking to Instagram, Ram penned an emotional note, and alongside a special tribute by Amul, the actor wrote, “Truly speechless at the tribute that Amul has made for my father. You were a true legend dad. I miss you so much. Rest in peace.”

In the tribute, the famous Amul girl is seen suited up while sitting next to Anil Kapoor, in his office as the two have a chat over something and take notes of it. The words on the picture read, “You will always be part of our famuly” and “Anil (Billy) Kapoor 1947-2021”.

As per reports, fondly called ‘Billy’, Kapoor had a long-standing association with Amul, since the brand was its client from the year 1998. For the unversed, Anil Kapoor was the former CEO of the advertising agency, FCB ULKA. It was Anil who gave Amul the tagline ‘Taste of India’.

While sharing the tribute, Amul captioned it, “#Amul Topical: Tribute to one of the doyens of the Indian advertising industry…”

Ram Kapoor’s wife Gautami too paid tribute to her father-in-law and shared a post on Instagram to mourn his loss. She wrote: “Dad … you live in our hearts forever…. RIP … to the strongest, toughest man I ever knew.. love you.”

Remembering Anil Kapoor’s association with Amul, Gujarat Cooperative Milk Marketing Federation Managing Director RS Sodhi had told The Hindu, “There was a clear difference between Kapoor and any other advertising head. In those days, agencies were headed by people from creative areas. But, Kapoor was the man who had come from marketing and sales to advertising.”