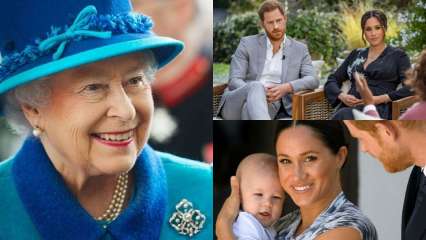 After the explosive, tell-all interview of the Duke and Duchess of Sussex, Prince Harry and Meghan Markle, Queen Elizabeth and her family said on Tuesday that they were saddened to learn of the experiences of the couple, stating they would address issues around race that was raised by the couple in the interview with Oprah Winfrey.

“The whole family is saddened to learn the full extent of how challenging the last few years have been for Harry and Meghan. The issues raised, particularly that of race, are concerning.  While some recollections may vary, they are taken very seriously and will be addressed by the family privately. Harry, Meghan and Archie will always be much loved family members.”

For the unversed, Meghan, the wife of Prince Harry, accused Britains royal family of raising concerns about how dark their son’s skin might be and pushing her to the brink of suicide, in a tell-all television interview that sent shockwaves through the monarchy.

The 39-year-old, whose mother is Black and father is white, said she had been naive before she married into royalty in 2018, but that she ended up having suicidal thoughts and considering self-harm after pleading for help but getting none.

Meghan said her son Archie, now aged one, had been denied the title of prince because there were concerns within the royal family “about how dark his skin might be when he’s born”.

“That was relayed to me from Harry, those were conversations that family had with him,” Meghan recounted in an interview with Oprah Winfrey aired on CBS late on Sunday.

Meghan declined to say who had aired such concerns, as did Harry. Winfrey later told CBS that Harry had said it was not Queen Elizabeth or her husband Philip. Harry said his family had cut them off financially and his father Prince Charles, heir to the British throne, had let him down and refused to take his calls at one point.

The two-hour broadcast was the most anticipated royal interview since Harry’s late mother Princess Diana shared intimate details of her failed marriage to Charles in 1995, denting the heir’s reputation and the family’s standing in the eyes of the British public.

Nearly three years since her star-studded wedding in Windsor Castle, Meghan described some unidentified members of the royal household as brutal, mendacious, and guilty of racist remarks.

She also accused Kate, wife of her husband’s elder brother Prince William, of making her cry before her wedding. While the family came in for open criticism, neither Harry nor Meghan attacked the 94-year-old queen directly.

(With input from Reuters)