Priyanka Chopra talks about ‘Unfinished’, reveals why she decided to ‘address her life’ in interview with Oprah Winfrey 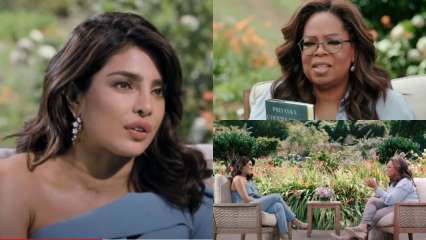 From making waves with her recent interview, Oprah Winfrey now sits down for an intimate conversation with one of the most recognizable faces in the world, international star, writer and humanitarian Priyanka Chopra Jonas to talk about her lately released memoir, ‘Unfinished’.

Premiering on March 20 on discovery+, as part of ‘Super Soul,’ hosted by Oprah Winfrey and produced by OWN, the sit-down interview will give audiences a closer look into Priyanka Chopra Jonas’ journey of self-discovery, her marriage to Nick Jonas and her New York Times best-selling memoir, ‘Unfinished’.

In a recently released promo video, Priyanka is seen candidly talking about her memoir ‘Unfinished’ that has been a rage among readers around the world.

When Oprah asks Priyanka about her recently released memoir and questions her why she chose this time to launch it, Priyanka said that the coronavirus lockdown finally gave her the time to catch up on her writing which she couldn’t indulge in otherwise given her hectic schedule. Priyanka also added that she is in a more secure place in her 30s, where she could leave behind the insecurities of her 20s.

“I felt like I could leave behind the insecurities of my 20s and not worry about the things that used to scare me before. I have a little bit more confidence in myself and what I bring to the table, professionally, personally. I think that really helped me address my life,” she said.

A part of the description of the promo video reads, “Relishing in the confidence she feels in her late 30s, Priyanka says she is happy to have moved past the insecurities of her 20s and brings that to light in her memoir.”

The interview with Priyanka Chopra Jonas will be a part of the media and lifestyle mogul’s, ‘Super Soul’ series which is based on her Emmy Award-winning TV show ‘Super Soul Sunday’. Apart from Priyanka Chopra Jonas, the series will also include intimate conversations between Oprah Winfrey and thought leaders, spiritual teachers, celebrities and authors like with prominent Industry luminaries Cicely Tyson, Sharon Stone, Julianna Margulies, Martha Beck, Jon Meacham, and Chip & Joanna Gaines– designed to inspire and explore well-being and a more whole, conscious life.