Priyanka Chopra on her bond with her pet 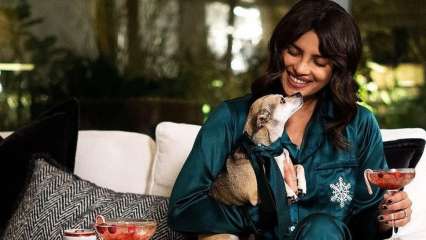 In 2016, Priyanka Chopra Jonas adopted a cute dog and named her Diana. It was during an interview with Buzzfeed the actor was surrounded by puppies and Diana clung to her. In no time, PeeCee took the cute little canine home and she has become one of her favourites in the world. The actor even created an Instagram page for Diana and has featured in several of her public appearances including magazine shoots.

Now, during an interaction with Financial Times, Priyanka spoke at length about her bond with Diana. She stated, “Diana was the first pup that I fully took care of. She’s from North Shore Rescue in New York, and she chose me. It was four years ago, at a time in my life where I was really low: I had just moved to the States, I was mourning my father’s death, I didn’t know anybody – I was working on Quantico for ABC and going back home on my own. One day, I was doing an interview with BuzzFeed, and they unleashed all these puppies on me and I was supposed to answer questions when I was handling them. Diana kind of hid under my arm. I just fell in love with her and had to take her home.”

PeeCee further shared, “I had no idea what to do with a pup, but it was she and I, alone in New York City. It was Diana I snuggled into, and Diana who barked whenever the door opened. With Diana, I had somebody to take care of and, in return, she took care of me. I feel that about my pups in such a big way. If you look after them, they really look after you; they heal your heart. They make us more human.”

Talking about separating from Diana for a few days and its effect on her, Priyanka said, “Diana had separation anxiety; she was really scared because she was so little when she was taken from her mom – three weeks or so. I don’t think she saw a lot of love. She didn’t like to be left alone, even in another room. She’d scratch the door up. She’s gotten much better, but I still can’t leave her. She has to come to film sets with me. But she’s small, so it’s OK. Now she travels with me most places; she’s grown up on film sets, so she knows when to be quiet – she’s super-clever.”