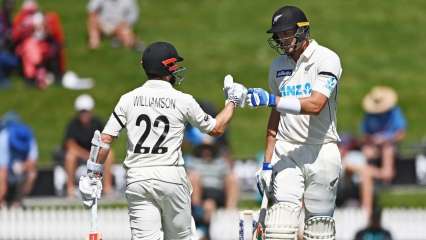 New Zealand head coach Gary Stead said on Tuesday that the Kiwi players currently serving their quarantine in the Maldives are most likely to depart for the United Kingdom this weekend. While most of the New Zealand players went back home after the 2021 edition of the Indian Premier League (IPL), a few members of the side bound for England to play the two-match Test series against the hosts and the World Test Championship (WTC) final against India next month, are in the Maldives currently undergoing their quarantine.

Skipper Kane Williamson, all-rounder Mitchell Santner, pacer Kyle Jamieson, and physio Tommy Simsek are part of the New Zealand team and support staff for the England tour and the coach said they are likely to leave the island nation by this weekend as the rest of the Kiwi contingent from their home country.

“I don`t know all the details right now. My understanding is that they are looking to leave (Maldives) somewhere around the time that we leave — May 15, 16 or 17 — in that time frame. My understanding is that England board is still working through the final details of what it means to come through the Maldives as supposed to New Zealand,” ESPNcricinfo quoted Stead as saying.

“They can still work on their fitness. So I don`t see it as a bad thing. It`s an adapting world and I think that`s just something we`ve got to keep doing,” he added.

Stead also shed light on left-arm pacer Trent Boult’s decision of going back home and not stay with the four of them to focus on his health physically and mentally, which will mean him missing the first Test against England starting June 2.

“Everyone has got their reasons around it. India changed very, very quickly, over the space of two or three days, and there were options put in front of the guys and he (Boult) felt for him and his mental health, the best thing he could do was get home for a while,” said Stead.”He is a professional, he has been there in the international circuit for a long time now. He will be ready. We are working through what build-up looks like to him and his readiness for the World Test Championship final when he comes back to us,” he added.