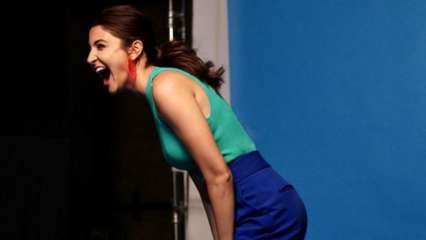 Anushka Sharma recently returned to work after giving birth to her and Virat Kohli’s daughter Vamika Kohli. The new mom who was set to return on the sets in May, did it in March last week itself. On Monday, Anushka Sharma shared a stunning photo on her Instagram which is sure to drive your Monday blues away.

In the photo, Anushka could be seen laughing her heart out as she wrote, “Is happy Monday an oxymoron?” The actor wore a green top, dark blue pants, and bright yellow shoes in the picture.

A few weeks back, Anushka had shared another behind-the-scenes snap from the set, where she could be seen reading a script while getting her hair and make-up done.

On a personal front, Anushka and her husband and Indian skipper Virat Kohli welcomed their first daughter Vamika on January 11, 2021. The couple had announced her birth on social media. Announcing her name a little after that, Anushka had written, “We have lived together with love, presence, and gratitude as a way of life but this little one, Vamika has taken it to a whole new level! Tears, laughter, worry, bliss – emotions that have been experienced in a span of minutes sometimes! Sleep is elusive but our hearts are SO full. Thanking you all for your wishes, prayers, and good energy.”

Meanwhile, on the work front, Anushka will be next producing ‘Qala’, a Netflix film through her production house Clean Slate Filmz. ‘Qala’ is set to be directed by ‘Bulbbul’ director Anvita Dutt and will star actress Tripti Dimri. It will also be late Irrfan Khan’s son Babil Khan’s debut film. The first schedule of the film was recently completed, Babil had revealed via his Intagram.