Television actress Rubina Dilaik, who was recently declared the winner of the controversial reality show ‘Bigg Boss 14’, was on Saturday papped at the Mumbai airport. This was Rubina’s first public appearance after winning the ‘Bigg Boss’ trophy.

Dressed in a greyish jumpsuit teamed with pink sneakers, a pair of cool sunglass and hair tied in a top knot, Rubina made quite a style statement at the airport where was filmed as she made her way towards the entry gate.

And while the paps stationed at the airport tried to interact with her, she is seen literally giving them a cold shoulder.

In the video shared by celebrity photographer Viral Bhayani, a videographer is heard congratulating Rubina to which the TV star does not reply. Then, the same videographer goes on to ask her if she is upset with the photographers for any reason. Rubina pays no heed to that either and just keeps walking towards the entry gate of the airport.

After taking a look at this video of the actress, several netizens slammed her for her rude and “arrogant” behaviour.

“Isee kehte hai attitude,” pointed out a netizen. ” “She is too arrogant toh kaha se kuch bolegi?” wrote another. “Superiority Complex is damn high!” commented yet another user. 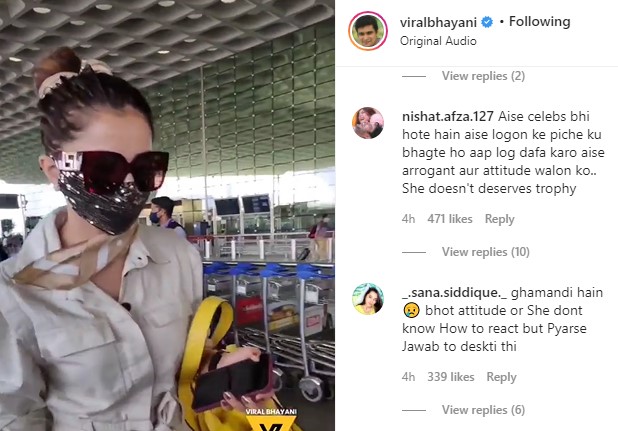 For the unversed, Rubina won the ‘Bigg Boss 14’ trophy and along with it took home Rs 36 lakh. Contestants Rahul Vaidya, Nikki Tamboli, Aly Goni and Rakhi Sawant were among the top five finalists alongside Rubina.

In a recent interview with DNA, while talking about her win, Rubina said, “I wasn’t expecting to win because Rahul (Vaidya) had come back and there were a lot of feedbacks about how popular he had become, he is a rage outside and hence he was brought back into the show and how Aly (Goni) had a strong social media presence. There was a lot of feedback that was given with respect to the other contestants and I had no idea whether people were loving my journey or not. But, I was just honest to myself and the way I was living in the house. So, I just thought if I make it to the finale, that should be an achievement. To be the winner, I hadn’t even thought I could do it.”