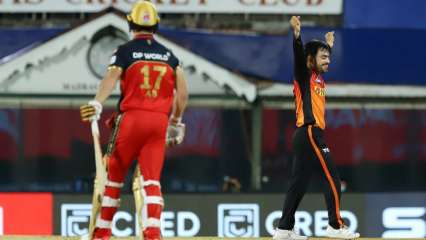 Royal Challengers Bangalore (RCB)’s would have wanted to change their fate against Sunrisers Hyderabad (SRH) in the Indian Premier League (IPL) 2021, but however, after being put to bat first, they surely could not get the start they wanted.

In match 6, RCB saw them lose wickets at regular intervals. Virat Kohli and Glenn Maxwell kept the momentum going, however, after the skipper’s departure, Mr 360 AB de Villiers came into the crease.

With his side being so dependent on him, the man came to the crease, in hopes of changing the fate of RCB, however, he could not do much damage as he was sent back by SRH’s go-to bowler Rashid Khan after scoring just one run.

Rashid Khan got the big fish with his short ball around off. It spun away from ABD and the batsman slapped it straight to David Warner at short cover.

So after his wicket, netizens took to Twitter to express disappointment of sending the big man so late to bat.

If he comes up the order , we could witness magical total on the board

The dangerous AB De Villiers is gone for 1(5) .

Who got him out? Woh Rashid tha#SRHvsRCB

As for the clash, SRH have done a pretty decent job when it has come to fielding as RCB has lost six batsmen and Maxwell is being supported by Kyle Jamieson. In 18 over, RCB only managed to score 127 runs.