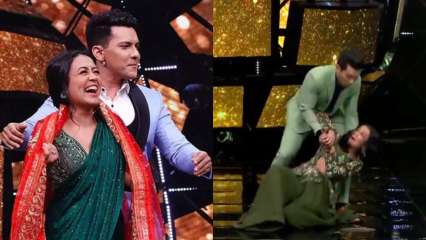 Neha Kakkar is one the most popular singers in India today and a judge on the singing reality show ‘Indian Idol 12’, where a lot of times hosts, contestants, and judges have fun times with each other. Did you know, in 2019, Neha fell on the stage during a dance-off with host Aditya Narayan?

In a teaser from 2019 of ‘Indian Idol 11’, Neha told Aditya, “Chalo, Adi, aaj tumhara aur mera dance ho jaaye (let’s have a dance-off today).” Later in the video, Neha could be seen dancing to her popular song ‘Dilbar’, as Aditya tried to copy her. Aditya’s dance moves had her co-judges Vishal Dadlani and Anu Malik as well as the contestants in splits.

In the end, Aditya and Neha were getting ready to do a step together but he lost grip of her hand and Neha fell to the ground.

For the uninformed, before Neha Kakkar married Rohanpreet Singh and Aditya Narayan married Shweta Agarwal, it was suggested in the show’s 11th season that Neha and Aditya would tie the knot. However, it was later revealed to be a publicity gimmick to boost ratings.

A few days back it also came to the forefront that Neha had begun her journey with ‘Indian Idol’. She had participated in the second season of the show but was eliminated early.

Earlier this month, a video of Neha on ‘Indian Idol’ had also gone viral online. In the clip, Anu Malik slapped himself to express his dissatisfaction as he asked her, “Neha Kakkar… Teri awaaz sun kar lagta hai main apne mooh par maaroon thappad, yaar! Kya ho gaya hai tere ko (I feel like slapping myself after hearing you sing. What happened to you)?”