Neetu took to Instagram and treated fans to a priceless unseen picture featuring her late husband in which he is seen enjoying the festival to the fullest with Big B.

The snap sees Amitabh and Rishi donning a police hat.

While, the ‘Don’ star sits on a person’s shoulder, being completely doused in colour, Rishi is seen dancing with a beer bottle in his hand. Neetu captioned the post, “Feel blessed to experience the times when HOLI was enjoyed and celebrated with colours of true love and happiness.”

Celebrity followers including fashion designer Manish Malhotra and more than 2.9 lakh followers liked the post on the photo-sharing platform.

Scores of fans dropped in heart emoticons and adored the picture shared by the ‘Kabhi Kabhie’ star.

On a related note, RK Studios was famous for throwing grand Holi bashes for the whole Bollywood fraternity and this picture can be the one from the archives.

Earlier, Hrithik Roshan’s mother Pinkie Roshan too shared an unseen photo from Holi celebrations with Neetu Kapoor, which she mentioned was probably from 30 years ago. She also mentioned that she missed brother Rishi Kapoor.

Meanwhile, late actor Rishi Kapoor’s daughter Riddhima Kapoor Sahni too shared a photo reliving her childhood memories. In the pictures that Riddhima shared on her Instagram Stories, she can be seen posing with her mom Neetu Kapoor and brother Ranbir Kapoor who is adorably eying at a ‘laddoo’ in his hand. 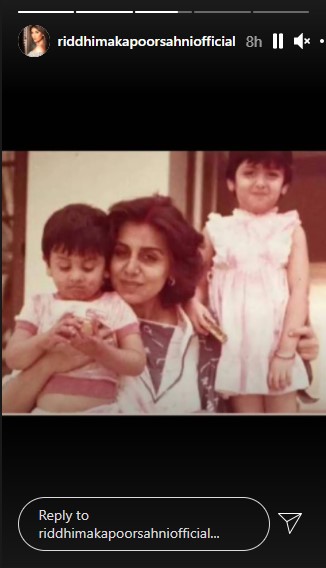