‘My claws will come out,’ says Mandira Bedi on calling out trolls who passed derogatory remarks about her daughter Tara


On Monday, actor and television presenter Mandira Bedi called out social media trolls for labelling her daughter Tara as an ‘adopted street kid’.

And now, in a recent interview with Times of India, Mandira has opened up about the distasteful comments on social media.

Speaking about the same, Mandira said, “I have faced trolling from the time I have been on social media. Initially, I used to respond to negative comments, but I realised I was giving these haters what they were seeking — attention.”

Adding that she isn’t rude and has never used social media to attack others, Mandira added, “I use it to spread positivity. I don’t know what struck me that I went through the comments on this one photograph of my family. It was appalling to see those nasty comments for a little child. What kind of people say such disgusting things about a harmless kid? While I normally ignore trolls and haters, these two-three messages that I saw late at night on Monday upset me, and this time, I felt the need to respond.”

She further said, “Tara is innocent and too young to understand what happened, but it hurt me. I don’t give two hoots about nasty comments. I can laugh over them when they are about me but it’s not okay to attack my family, my children. I can’t take it. My claws will come out.”

For the unversed, several social media users had passed demeaning comments about Tara.

“Madam from which slumdog centre did you adopt your prop daughter?” wrote a social media user. Another commented, “The adopted street kid looks completely out of place…u greedy narcissists are scarring the slumdog for life.”

Responding to the trolls and sharing a screenshot of the first message, Mandira wrote, “People like this need to be given a special mention @bollywoodforevaa. You got my attention, you piece of s**t.” 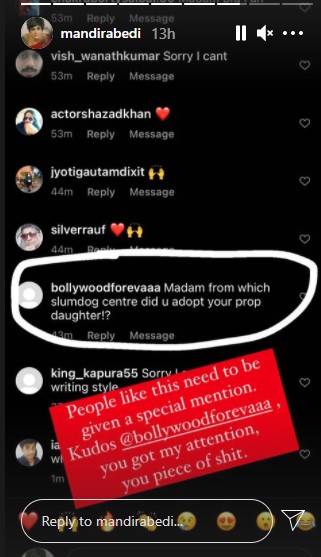 On the second screenshot of the abuse directed towards Mandira’s daughter, the actor wrote, “More from the model citizen. He calls himself Rajesh Tripathi, which definitely isn’t his name because sickos like this are the biggest cowards too, who only know how to wag their tongues behind the shield of anonymity.” 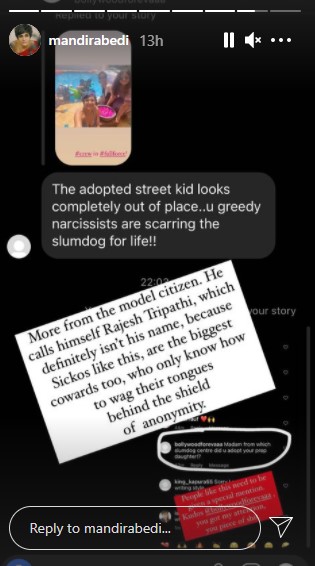 Last year, Mandira, who is married to filmmaker Raj Kaushal, had announced that they had adopted four-year-old Tara who is now a part of their family.

Alongside her family photo, Mandira wrote, “She has come to us like a blessing from above, our little girl, Tara. Four years and a bit with eyes that sparkle like stars, sister to her Vir. Welcoming her home with open arms and pure love. Grateful, thankful. blessed…Tara Bedi Kaushal became a part of our family on 28th July 2020.”

Mandira and Raj had welcomed their biological child Vir in June 2011.

For the first time since Covid-19 vaccines became widely available in the U.S. this year, both employees' willingness...
Health