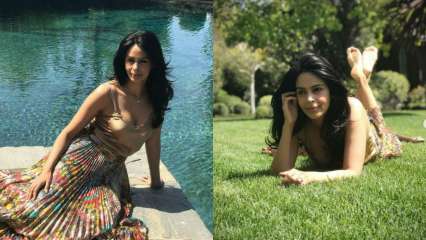 Actor Mallika Sherawat, who has been stationed in the US for a prolonged period of time, on Monday, took to her Instagram handle to treat fans with a stunning view of her sprawling villa in Los Angeles.

The diva whose film ‘RK/RKAY’, directed by Rajat Kapoor, recently released in the States and Canada in the theatres, will be seen foraying into the digital space as an artist with two back-to-back web shows. Additionally, she is also looking at making a splash closer home with Indian content that she working on and a few films offers that she is considering.

The short video shows Mallika playing with her dog Lily and chilling by a pool. The video opens with a video of large blue French doors and a white dog playing on the patio. Potted plants and a comfortable seating area in the patio is clearly visible in the video. Mallika emerges from behind the doors in a multi-coloured kaftan and a flower tucked on her right ear. She talks to the dog, climbs down a few steps and walks through an expansive lush green garden area to her swimming pool. She dips her feet in the pool and splashes water around and smiles as the video is being recorded.

Take a look at the video here:

This is not the first time Mallika has given fans a glimpse of her Los Angeles villa. Earlier as well, she has shared pictures posing in the garden area and well as near the swimming pool.

In 2013, Mallika had spoken about moving to Los Angeles in an interview with Variety. “I made a conscious decision to divide my time between Los Angeles, America and India. So, now when I experience that social freedom in America and when I go back to India which is so regressive for women… It’s really depressing to see that, as an independent woman,” she had said.