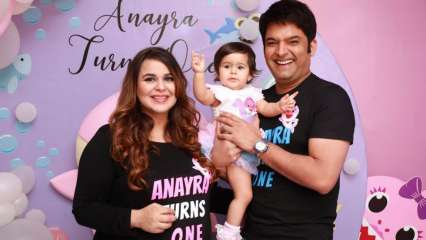 On Sunday, Kapil Sharma finally announced the name of Ginni Chatrath and his second baby, a boy. The couple has named him Trishaan and the comedian-actor announced via his Twitter page on Neeti Mohan’s request. The singer asked Kapil, “Happy birthday dearest @KapilSharmaK9 Pahji. Lots of love to you and your family. Ab to baby boy ka naam bata do.” To which Kapil replied, “Thank you Neeti. Hope you are taking well care of yourself. We named him Trishaan.”

Now, we have got to know the meaning of Trishaan and its Lord Krishna. Kapil and Ginni already have a one-year-old daughter named Anayra and the meaning of her name is Happiness.

Kapil and Ginni welcomed their baby boy on February 1, 2021. Kapil announced the happy news on his Twitter page by writing, “Namaskaar! We are blessed with a Baby boy this early morning, by the grace of God, Baby and Mother both are fine, thank you so much for all the love, blessings n prayers. Love you all – Ginni and Kapil #gratitude.”

Meanwhile, on the work front, reports are making the rounds that The Kapil Sharma Show will be returning soon on the tube after a short sabbatical. On the other hand, the comedian-actor is all set to make his digital debut with a Netflix original.